I received the below Steve Spangler Science Club kit to use for this review. All opinions are my own. 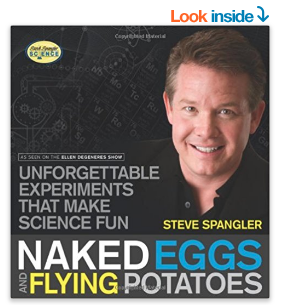 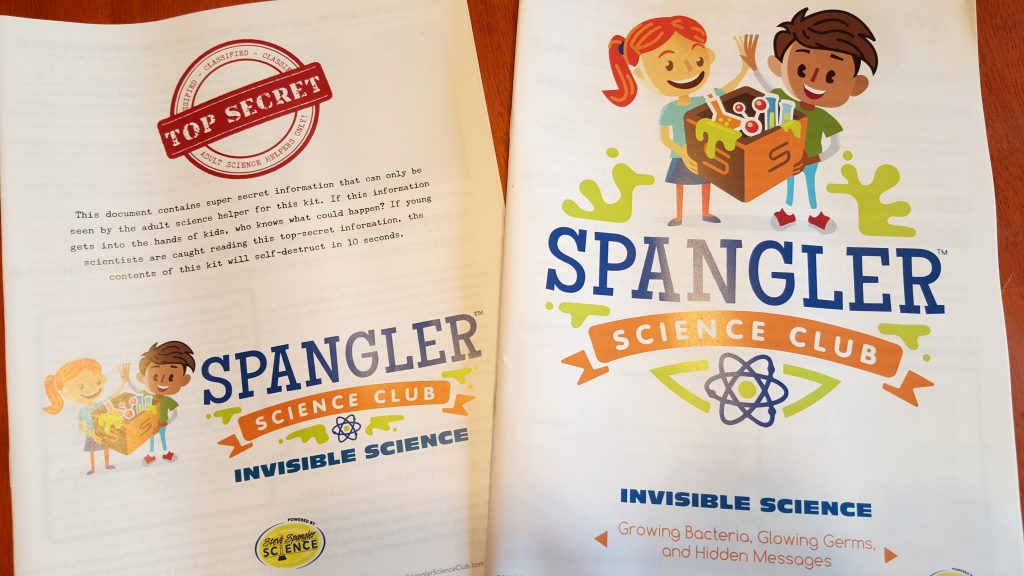 When I heard about the Steve Spangler Science Club I KNEW I had to check it out. I am a total science geek at heart and have always used my science degree to “WOW” other kids with fascinating science experiments and facts. I have followed Steve Spangler for years and used his captivating and eye catching science videos on YouTube to share with classrooms as well as my own children at home! There’s just something about seeing “magic” colors change, things exploding and catching on fire that immediately captivates a kid’s interest.

I just always assumed that science experiments like this were “easy” to create and that extravagant experiments were simple to do but over the years my husband has shown me that it’s not so easy for people like him who are not gungho into science! Many teachers and parents need experiments that are pre-explained, put together and thought out. In fact I still have teachers coming to me asking me what I assumed were simple science questions so I REALLY wanted to check out these science kits geared as a monthly gift. 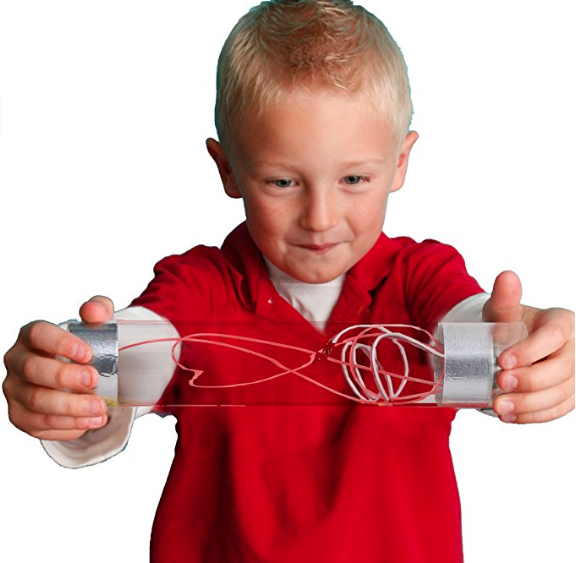 The Steve Spangler Science Club has various monthly options to receive their science kits which pretty much include whatever you need for your experiments except perhaps some water or basic supplies. You can purchase the kit monthly, every 3 months, or for 12 months with a greater discount. These make fantastic gifts by the way! The kit we received I was SO excited about because it’s one of my personal favorites. You can also buy the materials on Amazon to make your own science experiment. BUY petri dishes here 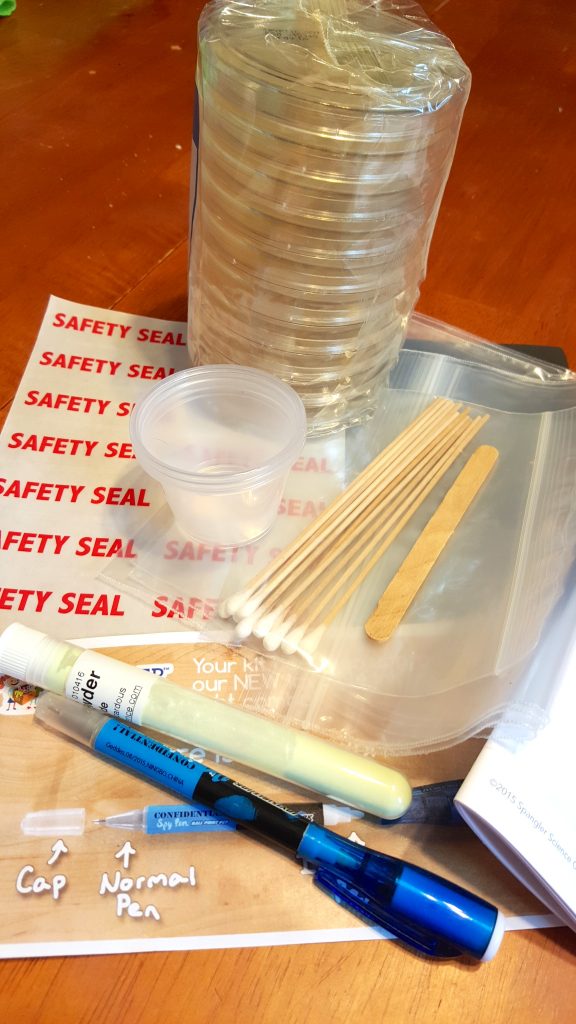 Well, I call it the invisibility kit anyway! Makes it more fun for my boys. It included two books – one for the kids and a “cheat sheet” parent book so that you know the right answers! The kids instruction book also had plenty of places to write observations, draw visual art as well as extended sections for further science fair observations. It also included a set of pre-made petri dishes with agar

WITH a small black light built in, some bags, cotton swabs

, cups, bags and safety seals. Because I LOVE creating mystery for my kids I had everything ready for them to explore on our first snow day of the year. We were going to EXPLORE the INVISIBLE! Which of course grabbed my boys interest (ages 8 & 6) and we were off to a good start! 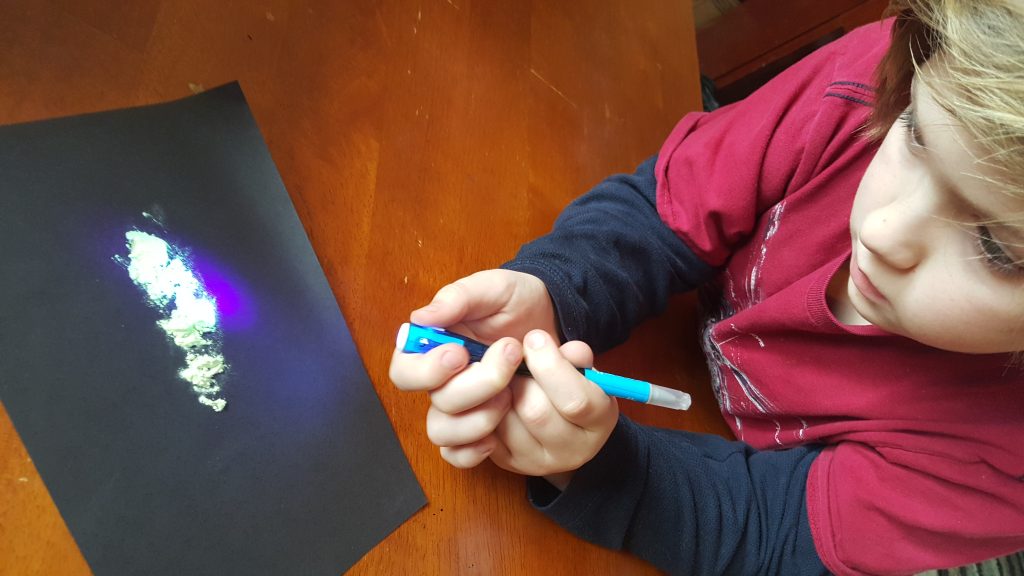 First we discussed what things in life are very real but seem invisible to us – the wind, germs, emotions. We started with germs and the importance of understanding that not all germs are bad and also how important it is to wash our hands a LOT because bad germs can easily spread. (It also helped that little sister has been very sick so we referred to her picking up germs.) I was SO thankful the kit included a black light pen

as we used it for most of our experiments. 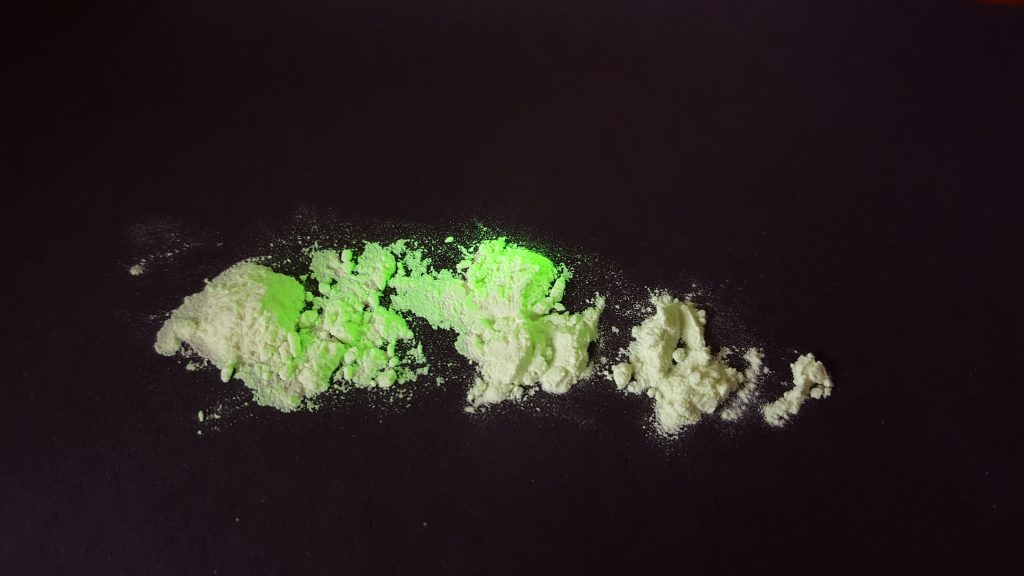 Immediately after shining the black light onto the glow powder

you can see above that it “glows” quite brightly. That is not a filtered photo – it really glows that  brightly! 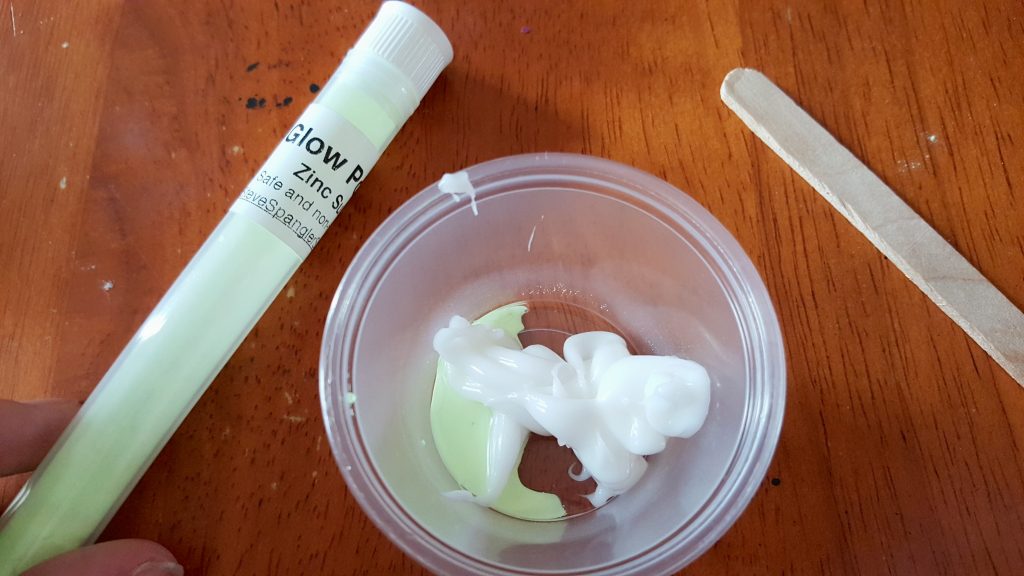 We did several things with the glow powder but we also mixed it with some lotion we had in the house and decided that later at night we would have a GERM HUNT! We’re going on a germ hunt! We made sure to use plenty of glow powder and lotion mixed together on our hands, of course talked about germs and hand washing, and then waited till nightfall when we turned off the lights in the house, flipped on our black light, and began the search for “germ” transfer. We found germs on light switches, knobs, all over walls, still on our fingers, and EVEN behind my piano! 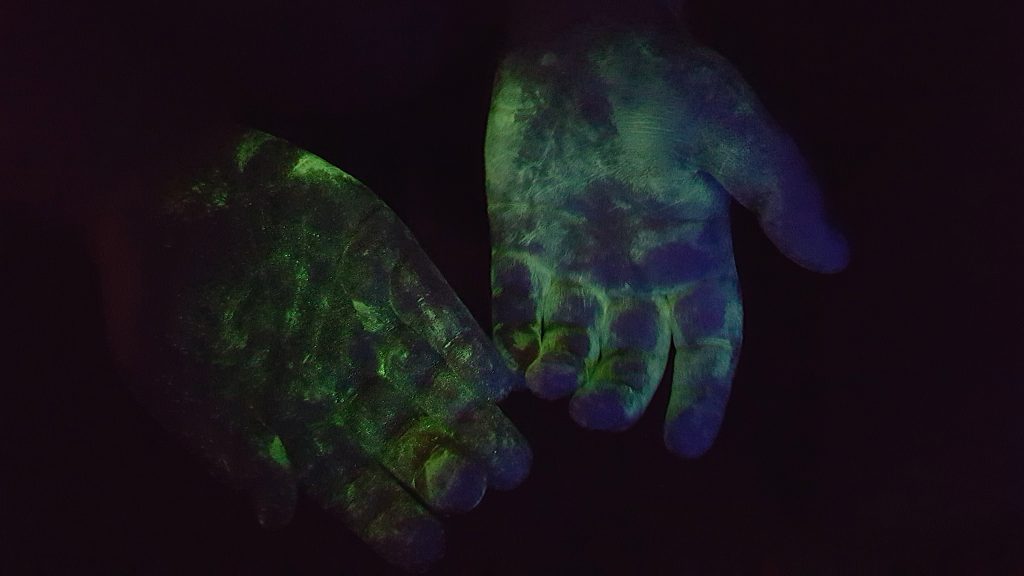 The kids were fascinated with their hands glowing incredibly. Although this was artificially done with glow powder we branched out to talk about bioluminescent animals as well. There are really so many extended lessons that you could pull out of these experiments! 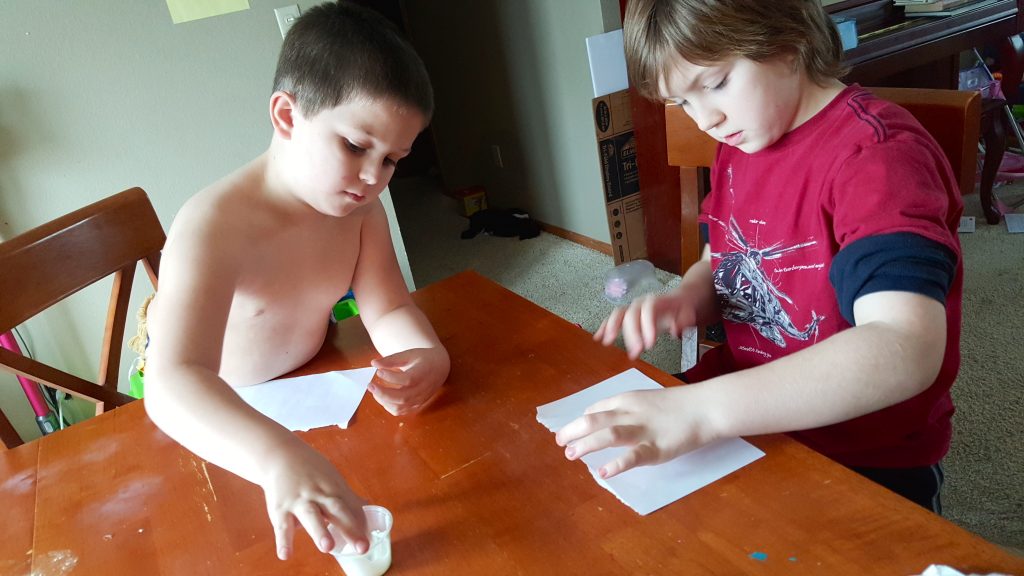 We also mixed our glow powder with white school glue

and the kids used their fingers to paint super secretive messages to light up later with the black light. 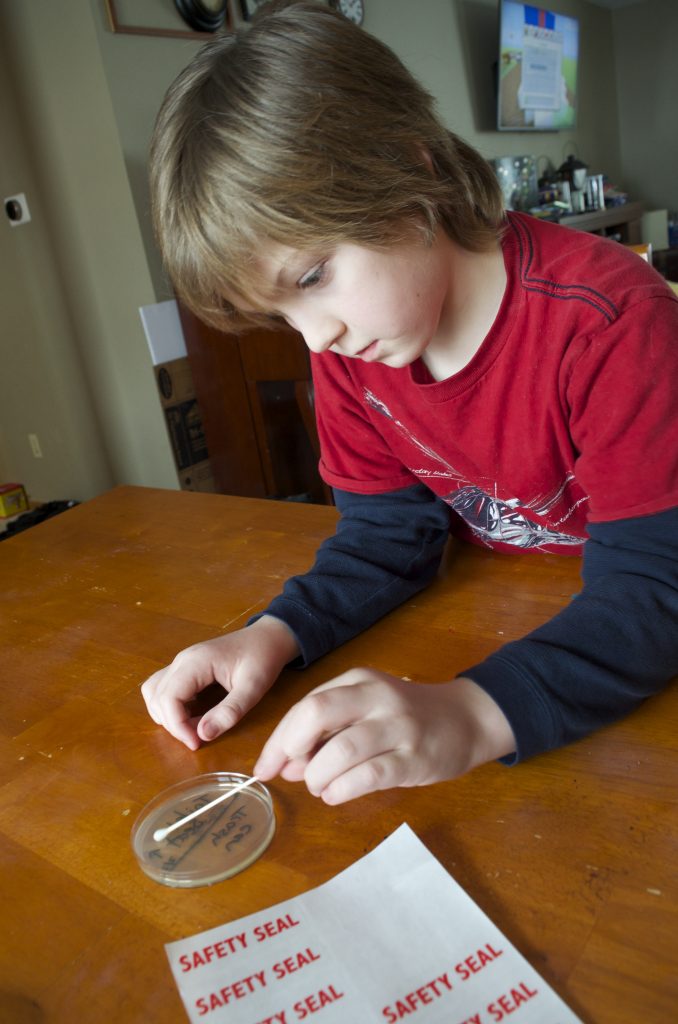 Next we moved on to GROWING our germs! This is one of my personal favorites as I used to work in Microbiology (which was also my favorite class in college!) So for this experiment I cryptically explained to my boys that we would be making the invisibly visible! Growing bacteria is really easy and fun (and a bit smelly!) and provides a fantastic visual for kids to understand some of the “invisible” world that touches everything. 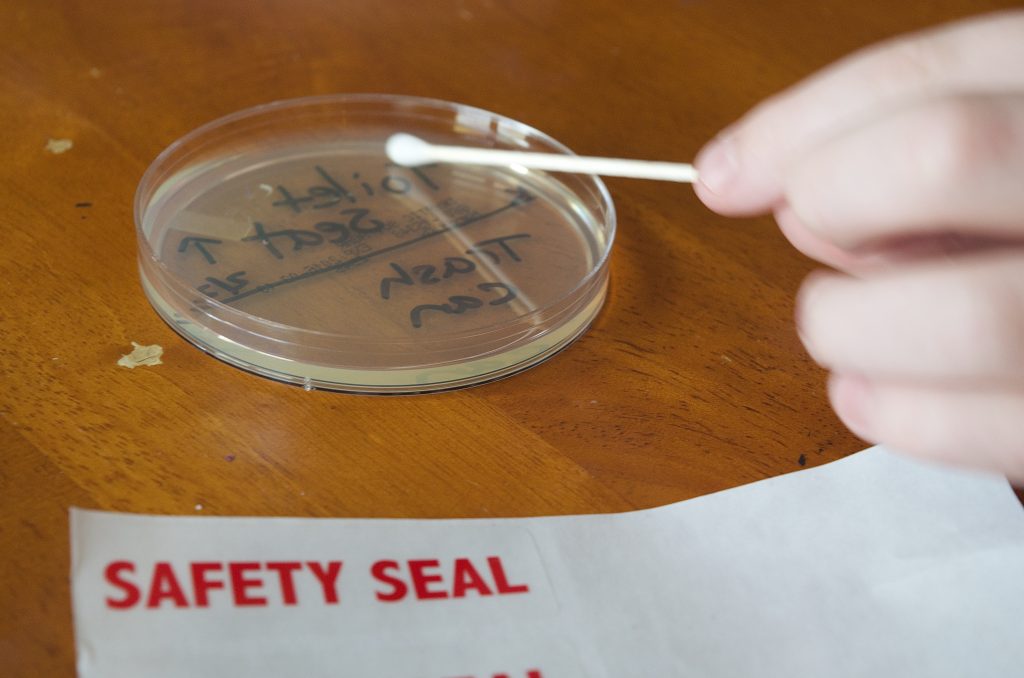 to draw a line in half on the bottom of the Petri dish. Make sure you LABEL everything! It’s a good idea to add the date too so you can see how long your bacteria has been growing! We swabbed the garbage can, the toilet seat, the sink, and EVEN our cat’s mouth! The boys also did the inside of their mouth BEFORE AND AFTER they brushed their teeth to see the difference that toothpaste would make in their mouth (or did it?!)! Lastly, I had my boys press each of their fingers very lightly directly onto the agar to see what “germs” they might be growing on their fingers. Once we saw what grew it was a VERY visual and good reminder for them to not only wash their hands more frequently but also to not put their fingers in their mouth (or in their baby sister’s mouth!). 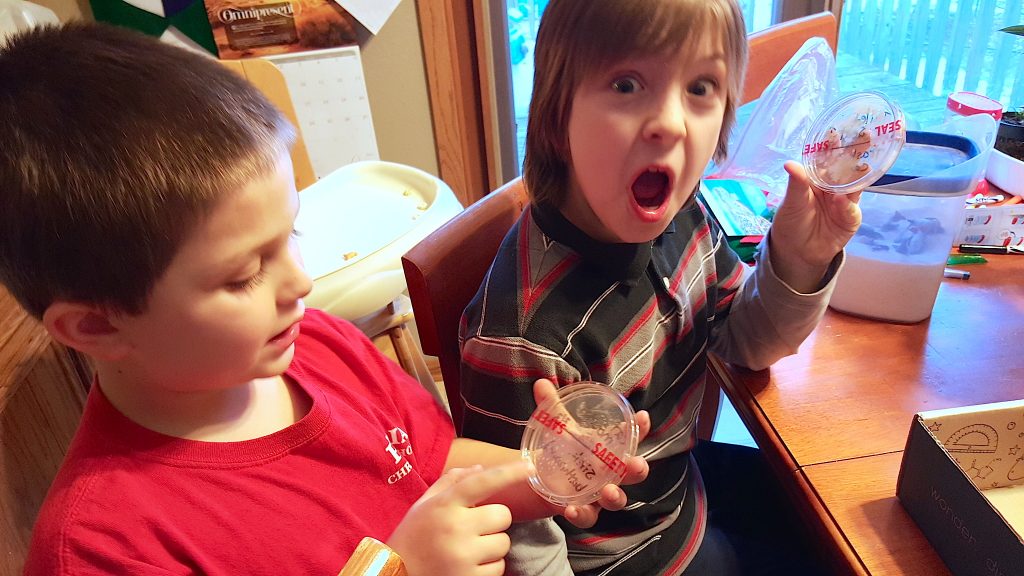 Yep – that is pretty much my son’s reaction after he saw his petri dish of bacteria from his fingers growing! 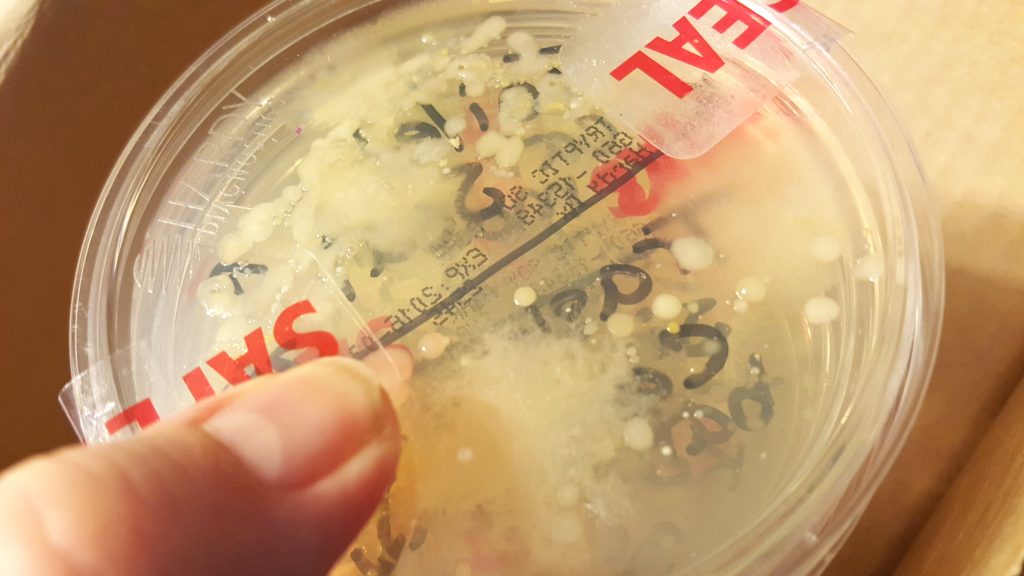 Here’s an up close of one of our petri dishes. Don’t be alarmed if your box of bacteria dishes smell – that’s normal! If you look closely you can see various shapes and colors growing as well. In the Steve Spangler parent’s book they have a diagram to explain the names of the different shapes of bacteria that you might grow. 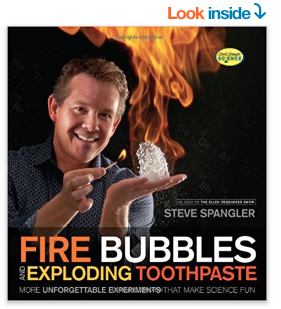 There are a few things I really like about this Science Club box we received. One- it’s pretty all inclusive. You don’t need much more than the box to get started. It’s all VERY simply laid out for both kids and parents to not only do the experiment but also to understand it completely as well as take it even further. I’m a big sucker for the WOW factor when it comes to science and Steve Spangler has always done a great job that. Science experiments that make kids say WOW and encourage them to want to learn more. Lastly that there are SO many options for experiments in one box. There were 2 main ones – the glow powder and the petri dishes – but within those 2 were multiple more ideas to expand into.

Overall – honestly it really is a great value for the price. At first I kind of always cringe at monthly subscriptions no matter what they are just because I’m so cheap (living on a teacher’s income and all!) but just the materials for the experiments in our box would pretty much put you at the subscription cost – at least for the box that we received, I can’t speak for every month. Not to mention that all of the experiments and books are VERY well laid out for both parents and kids. We were easily able to not only use it with all of our kids but we have plenty of supplies leftover for more experimenting later on. This makes a FANTASTIC gift to send someone during the year that passes along both the WOW factor and educational learning! 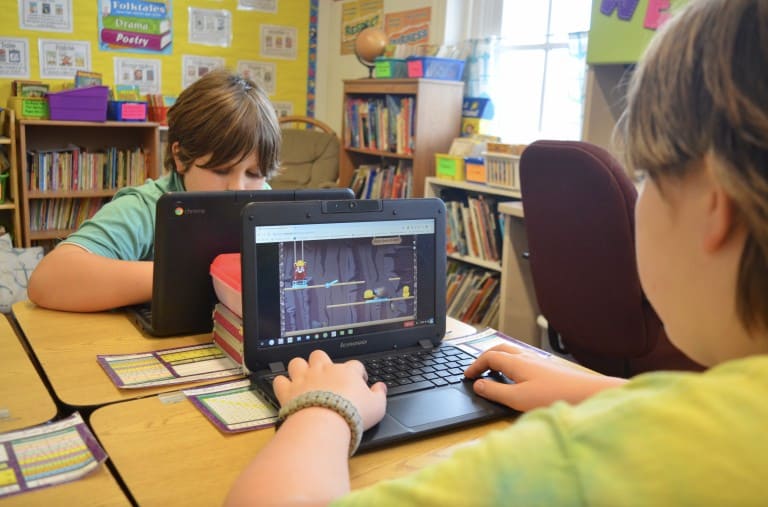 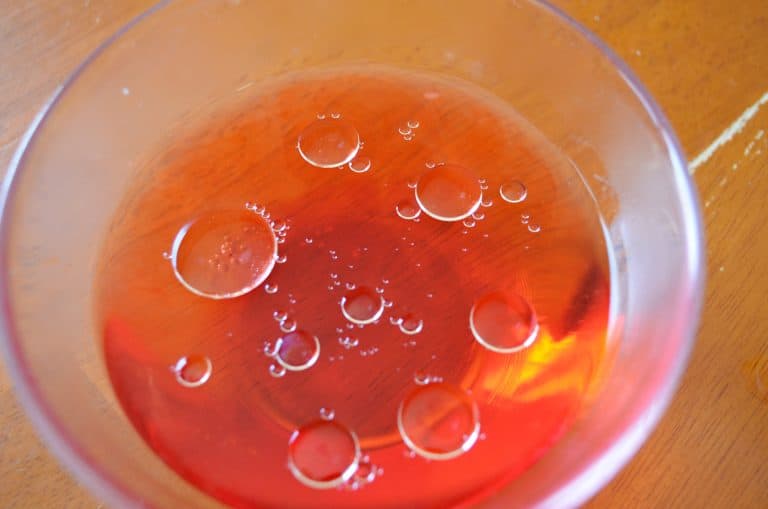