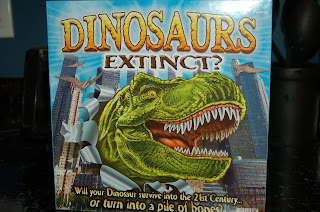 Briarpatch is an educational toy company (they’re green too!) that has received over 300 awards for product excellence – in just under 10 years! They have great brands such as I Spy, Fancy Nancy, Goodnight Moon, Thomas and Friends, Maisy, Frog and Toad, the USPS, and more! I had the great opportunity to meet with them at BlogHer last month and view some of their products! Above you see one of their games Dinosaurs, Extinct? Will your Dinosaur survive into the 21st Century or turn into a pile of bones? 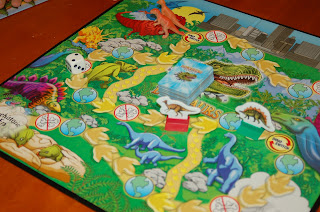 My four year old LOVES this game, and to be honest I don’t think it really has anything to do with the fact that the game is about dinosaurs – although that is a huge plus. This game is so simple to understand and play, although there are a lot of variables that can change the outcome of the game. My son is now an expert on this game and asks to play it every day. This is a great game for children to practice following the rules and directions! 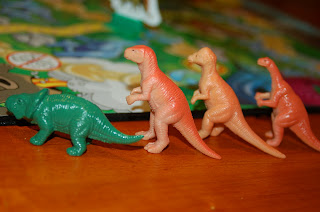 The object of the game? Get your dinosaur to the 21st century! You don’t want him to become extinct due to volcanoes, meteors, earthquakes, or other dinosaur attacks! Once you determine who is going first in the game, you roll the dice, and move along the dinosaur footprints path. If you land on a small globe you have to pick up an earth event card (volcanoes, meteors, dino attacks, etc.). You then re-roll the dice. If the number on your dice is higher than the number on the card, you are safe for that turn. BUT if the dice number is smaller than the number on the card you have to flip over one section of your dinosaur card as you see below. Flipping up part of the dinosaur card will expose the bones underneath as your dinosaur begins it’s way to extinction! If you have to flip over all three sections your dinosaur has become extinct!

However if you land on a No Bones spot along the path you can flip all of your cards back to your original dinosaur picture so that “no bones” are showing – and gain some dinosaur life back. There are also places on the board where you can switch your dinosaur with another dinosaur on the board too!
﻿ 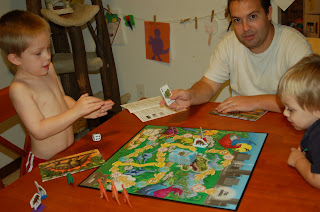 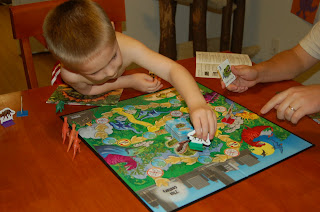 What did we think? It’s a winner!! My son is obsessed with it! I think he appreciates the complexity and variety that Dinosaurs, Extinct? has to offer, although the game is very simple to follow. It is not just a “roll the dice and move till you’re done” game. There are several different options in the game to land on as well as the hands-on variable with the flipping dinosaur cards and toy dinosaurs!

I love that Briarpatch’s games are earth friendly and educational! The bright colors and complexity of the board game certainly draw attention to itself! You can see below how much fun my son AND my husband are having! This is a great game for kids who want to keep busy. You roll the dice a lot to move, and you roll the dice every time there is an earth event card rolled. Between rolling the dice, moving your dinosaur, playing with your toy dinosaur, and flipping your dinosaur card – this game is sure to keep your kids happy and busy!! 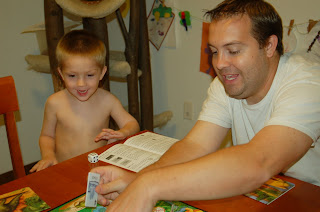 Briarpatch has generously offered one of my readers the same Dinosaurs, Extinct? game that we received to review!! This would be a fun classroom activity, or game for your kids or grandkids!