WELCOME TO OUR ROBOT PARTY!

Surely none of the parents could miss which house was having the robot birthday party! In fact one of the moms had forgotten the invitation and was worried should wouldn’t know which house to go to…..until she saw our mailbox robot! He was easy to make too and we didn’t spend a penny! I formed a box around our mailbox post that we had painted red earlier.

I taped on two juice pouch boxes to the bottom, taped on some colored circles for an “electrical panel”, stuck in two wooden spoons for arms, wrapped aluminum foil around my mailbox and designed a robot face on the front. AND our robot had our fog machine hidden inside so it was “smoking” outside during the whole party! The kids just thought it was the greatest! ……and our neighbor called half-way through the party because she thought our mailbox was on fire! HAH!

Because we are on a tight budget I spent months ahead of the party prepping and saving materials for our son’s special day. It was his first “real” birthday party. By using a robot theme it is extremely easy to recycle items and make your own decorations! I had seen some really cute pristine decor for kid’s parties, but I wanted my kids to love the party.

It was a kid-friendly party – not only that looked like a parent spent hours making everything look perfect. So after the kids were googling over our smokin’ robot in the front yard, they were greeted by this guy on our front porch. 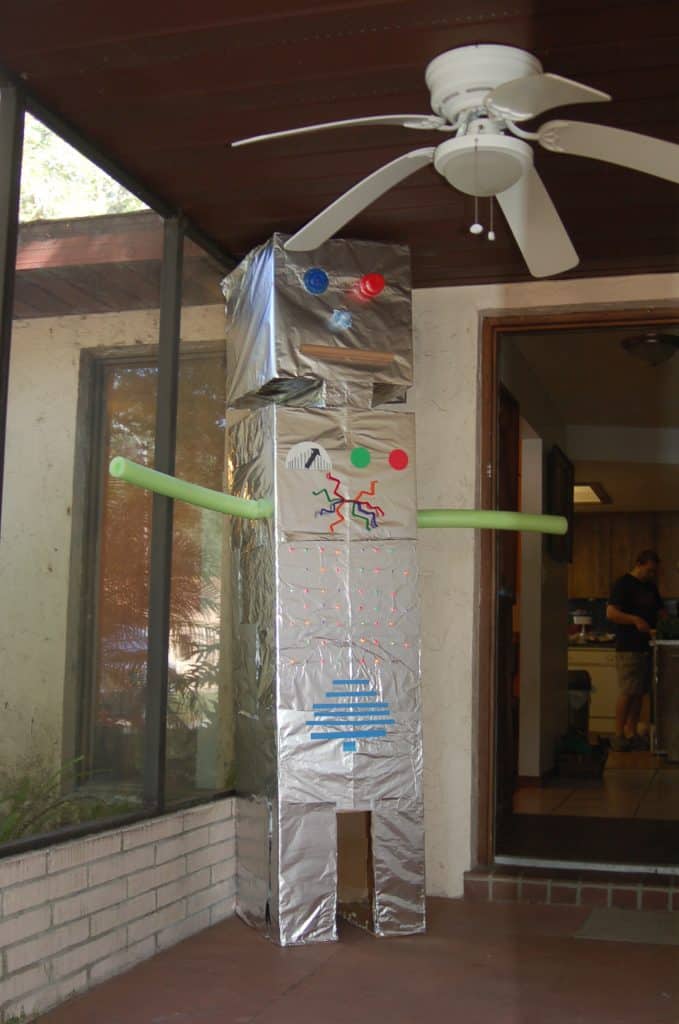 He stood about 7 feet tall and it’s very hard to tell from this picture but above the blue lines on the front is a fully lit electrical panel. It was very simple to make. We just drilled holes through the cardboard before we covered the robot with aluminum foil, then inserted Christmas lights through the holes via inside the robot. It really made for a pretty cool effect. By now the kids couldn’t wait to get inside! 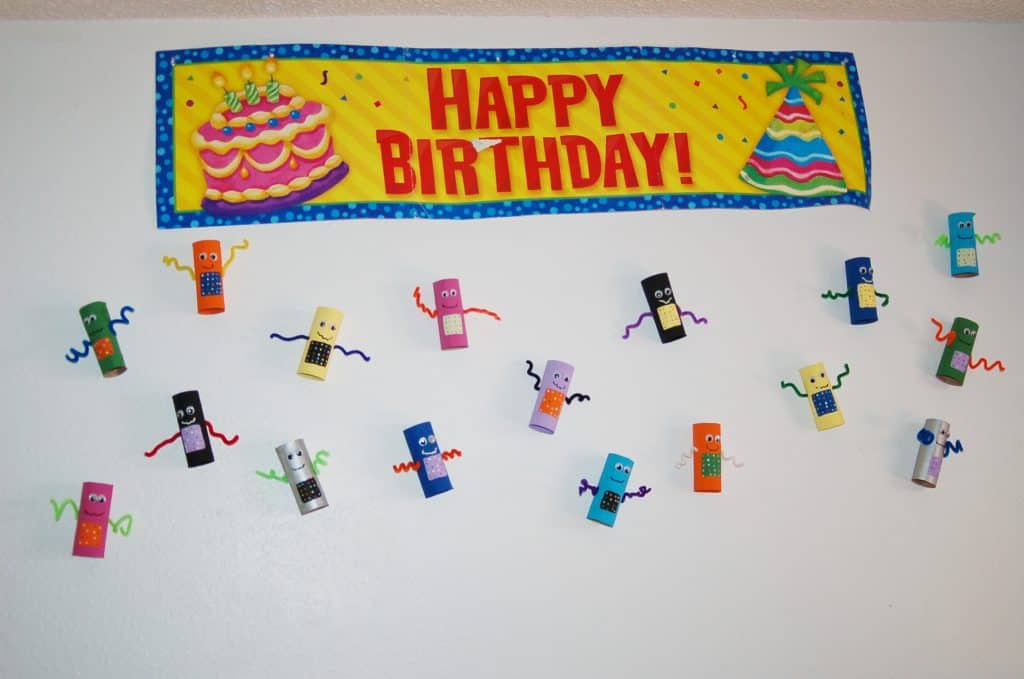 In the dining room we had all of our robots “extras. The wall was covered in these fun loving silly robots (you can see my toilet paper robot tutorial here) and of course a Happy Birthday sign. 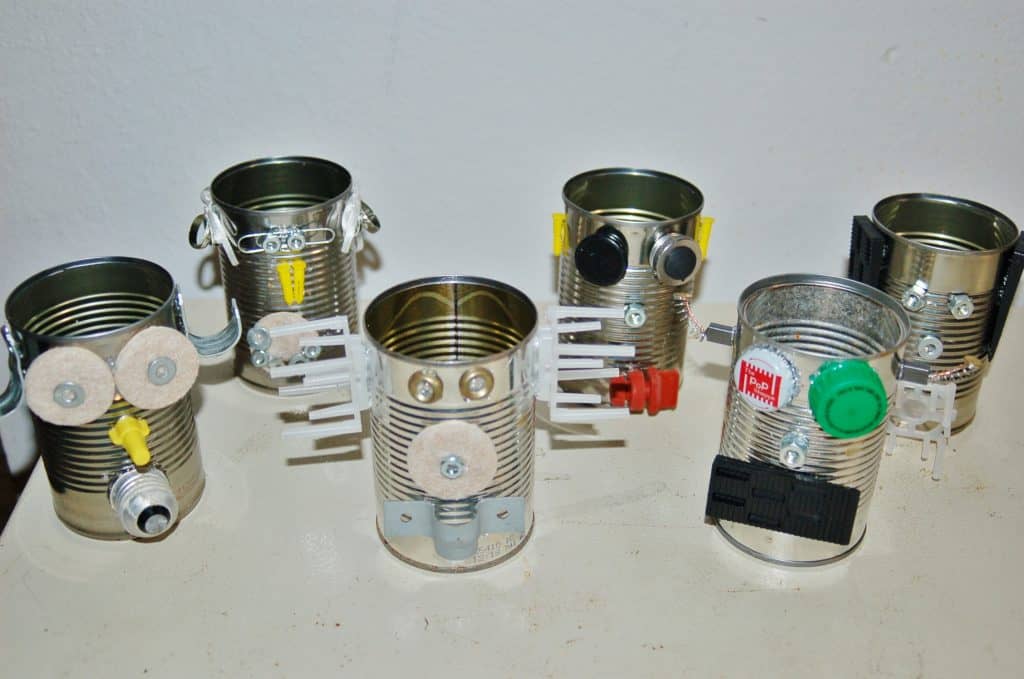 On the table was our recycled soup can robots which held our party favors (candy, a robot notepad, and mazes), our robot party hats, and little robot mini-buckets filled with marshmallows! We of course made the cans but we purchased the robot goody bags, everything inside them, the robot hats, and buckets for 16 kids all for under $10 by catching good deals online.  On our robot goody table was also our robot cake! 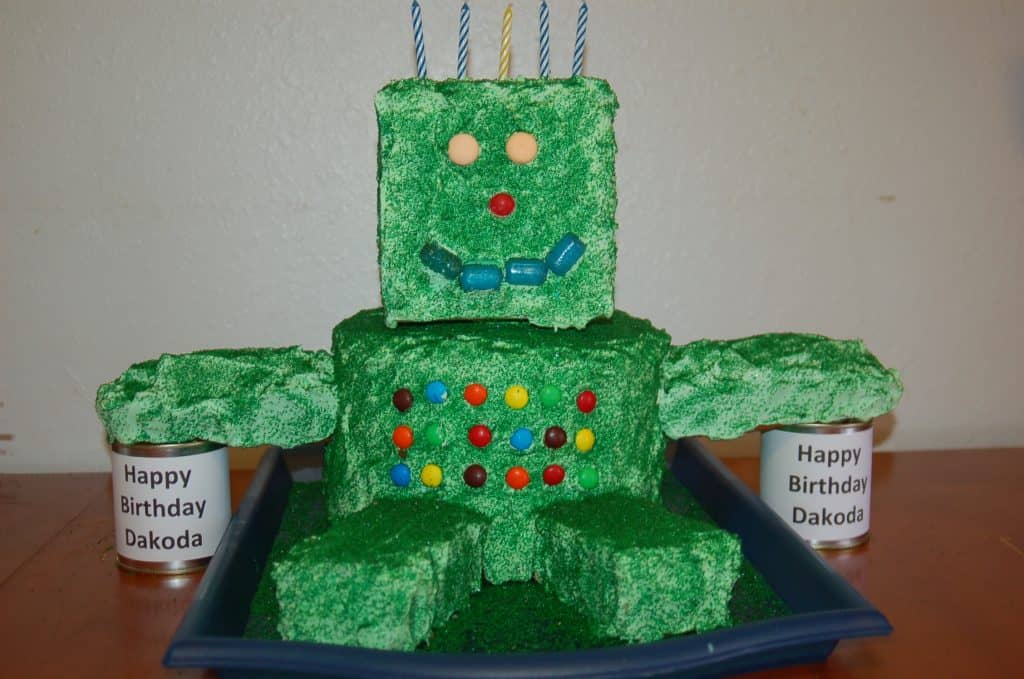 Cute isn’t he? He took a little creativity to think up but he was very easy to make! The round core of his body is simply comprised of 2 boxes of cake mix (each making 2 round cakes). We put one layer of cake on the platter, then layered on whipping cream, placed another layer of cake, then another layer of whipping cream, etc. until we had all 4 layers of cake in place. The arms and legs of the robot are both pound cake since it was easier to work with.

As you can see my platter was too thin otherwise I was going to prop the arms up like they were resting on the plate. The cans were my last minute quick-fix to keep the arms in place! Don’t laugh, but the robot head is actually a cardboard box which I covered in packing tape and then iced! So the candles on the top are actually stuck into a box and then I iced around them. The “frosting” is actually the same whipping cream I used inside of the cake layers.

I couldn’t use fondant because of my younger son’s food allergies so we dyed the whipping cream green using food gel coloring. Unfortunately it turned out to be a pastel green color so I took dark green sugar crystals and sprinkled them all over the cake to try and make it look a little more “cool”. What boy wants a pastel robot cake? 🙂 I used M&M’s for the “electrical panel” in the front as well as the nose, Mentos for the eyes, and Jolly Ranchers for the mouth.

It may not look professional but it was tons of fun and the kids absolutely LOVED it as well as the parents!! I spent under $15 for all of the cake, decor, and icing. The whipping cream cost the most ($7) because I had to work around my son’s food allergies. 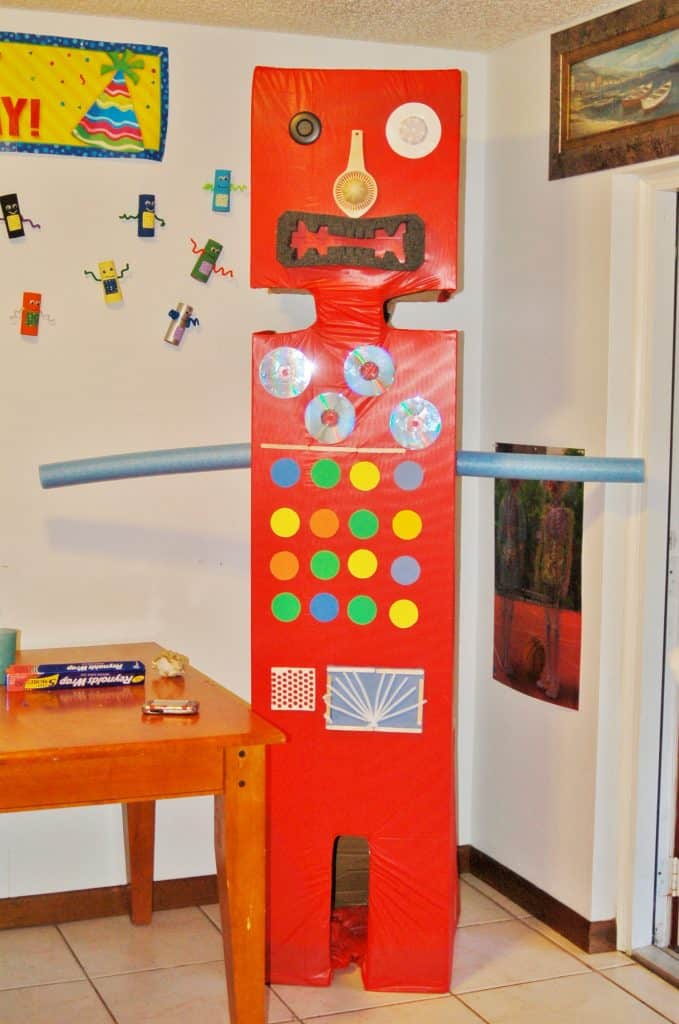 As if the fun robot cake wasn’t enough right next to our robot goody table was this big robot! He was my favorite robot of the party! It’s just one large cardboard box wrapped in a $.97 vinyl tablecloth and decorated with foam circles, old CD’s, and other random recycled pieces I was able to find around the house. 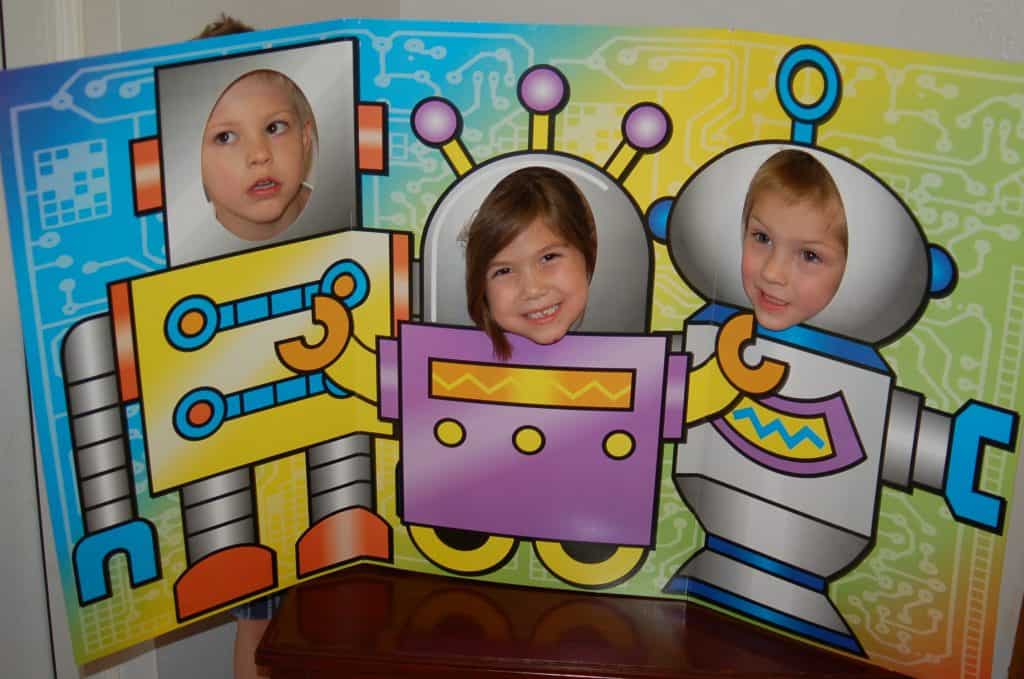 We also had a Robot Photo Booth set up. I was so excited about this because I had seen it on Oriental Trading for $.79 on clearance but the first time I checked the shipping was way more than I wanted to pay for a cardboard cutout! I had totally forgotten about creating one and spotted a “free shipping” deal last week so I was able to buy this photo cutout booth for only $.79 shipped! YEAH!

Remember that Build a Robot Station I showed you guys how to make? Check out a few of the robots that the kids made! 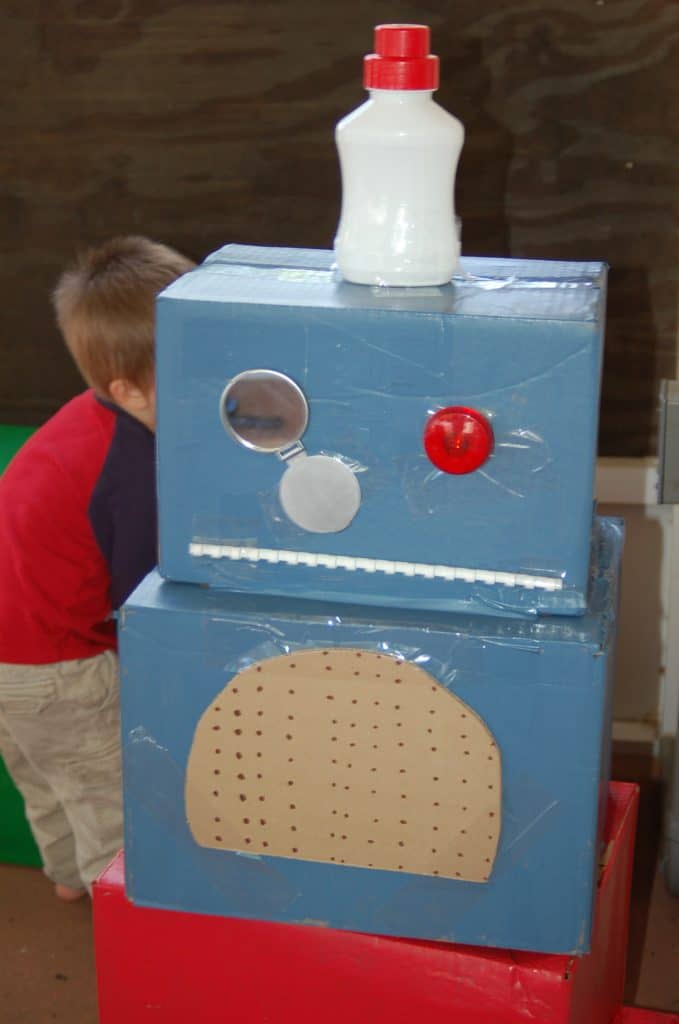 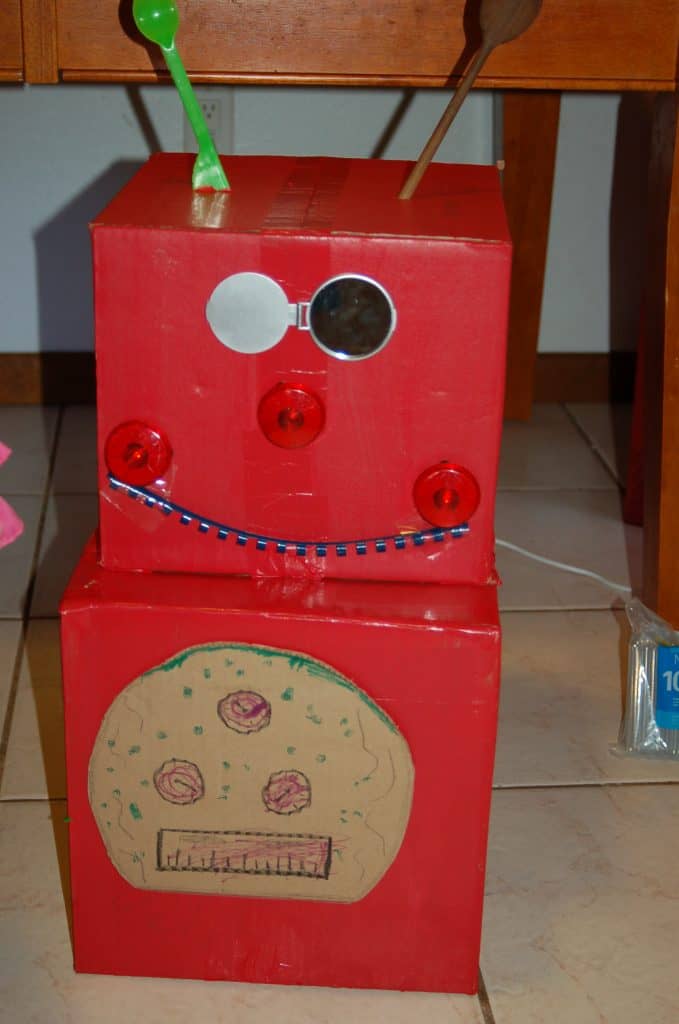 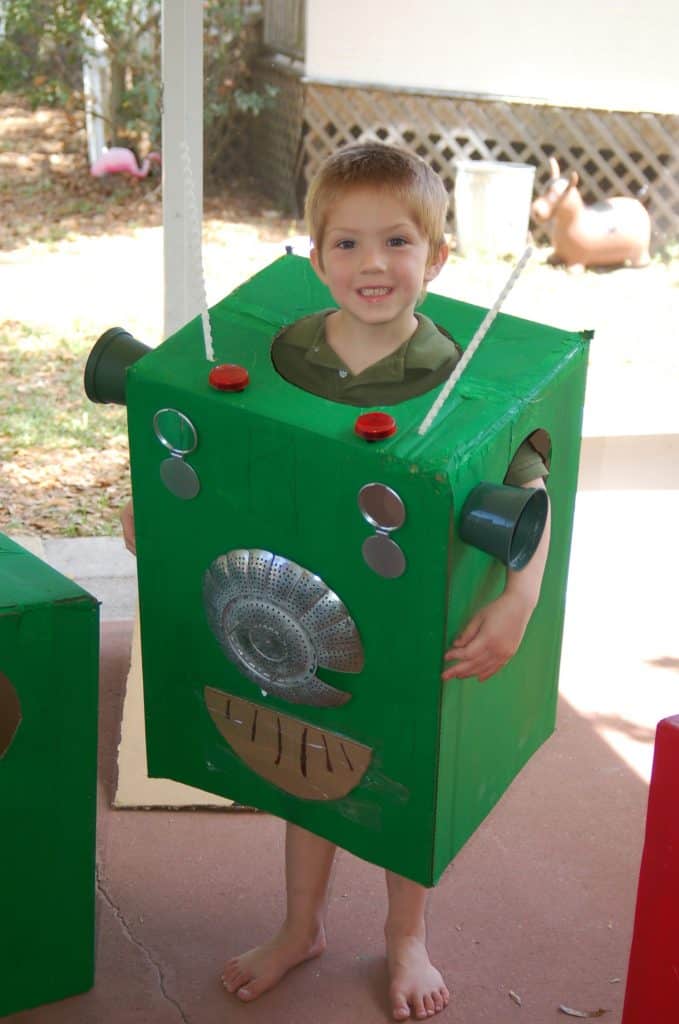 We had an absolutely FANTASTIC party. The weather was perfect, the kids had a blast! We also had our Blast Zone bouncy house set up in the backyard, we had this cable zip line set up that the kids had fun on. Inside we set up a station with all of the robotic toys we could find including our HEXBUG sets, several remote controlled cars, and my son’s new birthday gift – Bossa Nova’s Penbo Penguin Robot.

We had a TON of hands-on activities for the kids to keep them busy although we had no schedule or games for the party. PLUS we had a big pile of these free robot coloring sheets that were ultra cute. The parents just kept saying how this was the most fun birthday party they had ever been to! It was ultra kid-friendly and all of the kids got to take home the robots that they made!

We fed everyone lunch  and snacks (hot dogs, cheese, crackers, fruit, & chips) in addition to our robot cake. For the ENTIRE party – decorations, party favors, food, etc. we spent under $70 – the bulk of that being the food/cake (almost $60). We planned for 16 kids + parents but ended up with only 7 kids + parents so we have a TON of food left over. Oddly enough there is NO cake left. 🙂 It must have been THAT good! 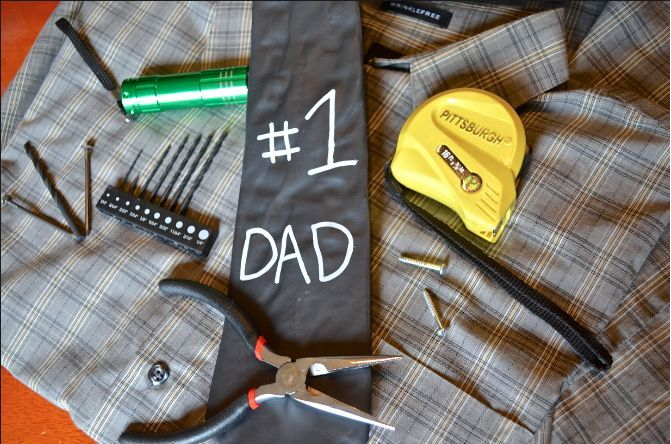 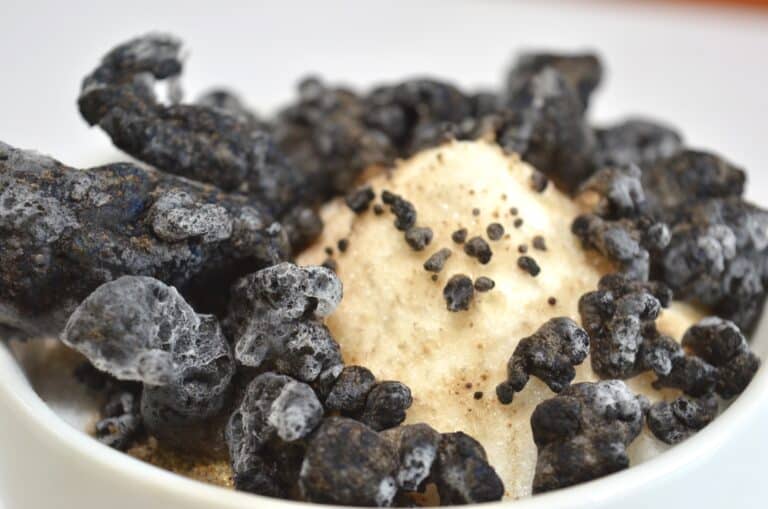