↑
Home » travel » A Photo Peek inside the Ripley’s Believe it or Not in Orlando, Florida
This post may contain affiliate links, view my disclosure policy. 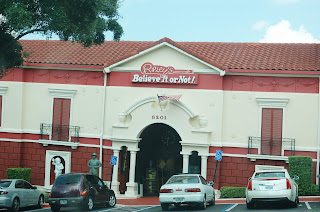 As most of you know Ripley’s Believe it or Not in Orlando has Teacher Appreciation Days where teachers + 1 guest get in free! (additional guests are 50% off!) So we loaded up the boys yesterday and headed to Ripley’s Orlando – roughly about an hour drive for us. We had driven past Ripley’s before and noticed it because of the “crooked house” effect – my kids always ask about it when they see it! They were quite excited when we actually pulled in!!

If you have not been to a Ripley’s before you are truly missing out. This is the 3rd one I’ve been to and I would love to visit them all. Not only will you learn amazing things about other cultures, but you’ll see odd people, behaviors, creepy facts, and sometimes downright funny stuff! It is in our nature to be enthralled with the unusual, and Ripley’s has always satisfied that curiosity for many! Above to the right you see the man with the golden nose. I can’t remember exactly how he actually lost his nose but he chose to glue a gold one in its place! And what would Ripley’s be without a shrunken head or two? 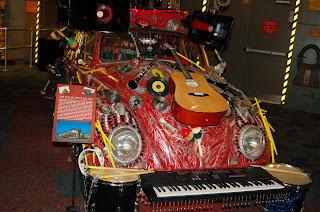 This was one of my kids favorite exhibits. This music car was made for kids to touch, clang, bang, and make all sorts of noise on! My boys played the keyboard, played the drums, shook maraces, and blew in flutes! 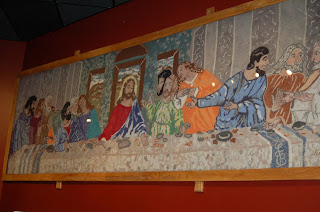 One thing I’ve seen in several of the Ripley’s Believe it or Not locations is dryer lint pictures – yes, I said dryer lint!! Look at this “artwork” above of the Last Supper. It’s made completely out of dryer lint! I wonder how long it took to collect all of that?? 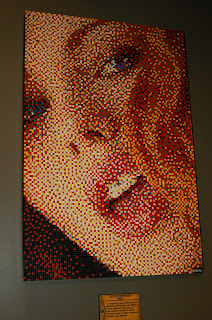 And if dryer lint was a little too weird for you, how about this artwork above made out of legos! Teeny tiny Legos, and lots of them!

Dinosaurs, dinosaur eggs and legs, Komodo dragon skeletons, and robots such as Wall-E were all interesting items to view. 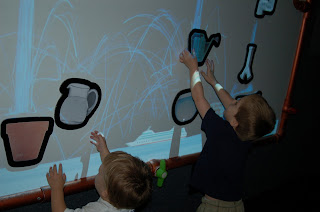 This room at Ripley’s absolutely fascinated my oldest son which is where he spent most of his time. It was a projector screen of a water piping system. The objects you see above are large magnets, which you can place in the way of the water stream and “fill up” the containers. As you can see above the water can also spill out and spray off of the containers as well!! 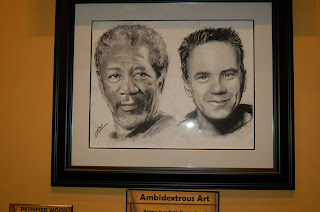 One of the most amazing things that I saw at Ripley’s Orlando was this artwork – drawn at the same exact time by one person – an ambidextrous piece of work! They actually had a video of the person who drew this picture – can you even begin to imagine drawing that sort of detail at the same exact time?!?! WOW! Now that is true talent! 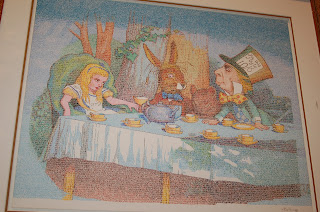 Here is a scene from Alice and Wonderland. You can’t actually see it in this picture, but the entire artwork is actually made of letters. I thought that was pretty amazing! 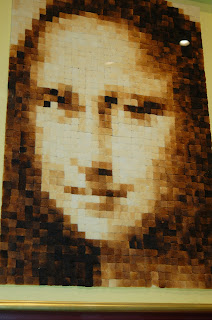 This was another amazing piece of artwork, I suppose you could call it artwork! What is this Mona Lisa made out of?? Toasted bread! Yep – little squares of toasted bread! Amazing! 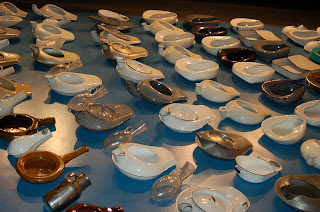 And of course there was the wall of antique, well, potties! 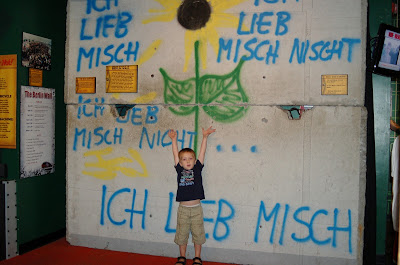 I saved this picture for last, because out of all the neat oddities and amazing talents – this is a piece of history. A piece of history I will never be able to visit or see – this is a section from the Berlin Wall. I didn’t know anyone even had a whole section from the Berlin Wall! Just knowing where this wall came from, and the history it had seen left me in awe. Just running my hands down the wall was a little eerie. I was so glad that I could share this piece of history with my son – even if he doesn’t understand it now.
A HUGE thanks to Ripley’s Orlando for supporting teachers and allowing us an opportunity to visit for free! It was well worth the visit – even with my two younger kids running around.