If you’ve been following the past few days here I’ve been highlighting some of the amazing things that we encountered at MOSI’s Bug exhibit! As you see above, there were several different “kid-sized” bugs to take pictures by. They were all so brightly colored & friendly looking!

When we walked into the exhibit it was great- everything was hands-on for kids. MOSI sure did an awesome job on this exhibit- I was very very impressed. Above they had crayon rubbings- all bugs of course. There were butterflies, dragonflies, and more. Below was a magnetic bug station next to the crayon rubbing station. It wasn’t as busy, but the kids could move the magnets around to build bugs. They even had bugs on springs that my little one LOVED! 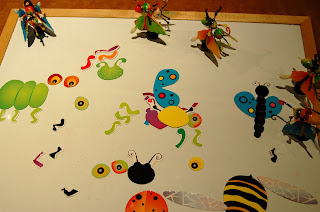 On one wall was a huge project screen (see below) where bugs were ‘flying’ around all over the screen. The cool thing?? When you stood still (see my husband’s arm) all of the bugs would ‘fly’ onto you! It was like they were landing on you- very cool. 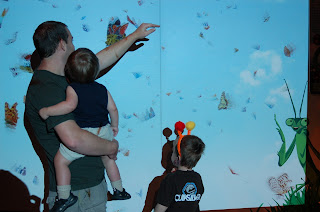 And then of course- in a bug exhibit at a children’s museum- you need to have real bugs right?? In addition to the Bug Petting Zoo there was also cages with bugs stationed at various places throughout the exhibit. Below you’ll see a praying mantis and some moths. 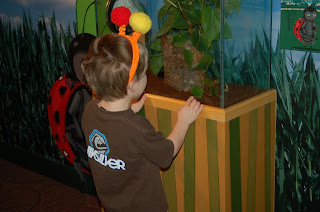 They even had this artistic 3D wall with corn popping out of the sides, and large grasshoppers ‘crawling’ up the sides of the wall. This wall was actually part of a bigger set up which was a maze that you could walk through. Perfect for little hands to touch! 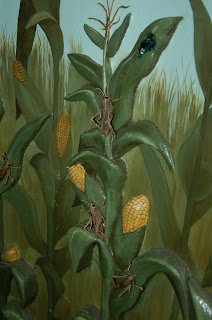 BUGS BUGS BUGS!!! They were EVERYWHERE! They were even portrayed as cartoons on the walls! The bugs you see below had little word bubbles explaining what they were and more about their species.

A favorite for kids is to go INSIDE the bug aquarium! Here is a glass aquarium display of some beetles. (I can’t remember what they were off hand!) The kids could crawl underneath it and actually stick their heads up into an empty dome for a different look at these bugs. 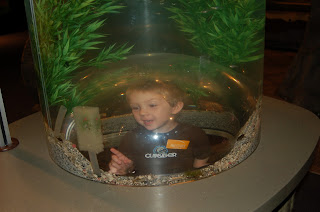 An in addition to real bugs, and cartoon bugs, fake bugs, and bug statues, there was of course- costumed bugs! Below you see Grant the Ant and Harry the Praying Mantis. Harry had a sweet attachment to my son and followed him through much of the exhibit- my son loved it! I even caught them playing “Peek-a-Boo” together in the big hollow tree!

As you can see we loved our visit at MOSI! Our family has reciprocal membership passes, and the actual Bug Exhibit only cost $3/person to get in! I think that was an AWESOME deal! As you can see through my week of posts about our trip there it was WELL worth the cost!