My kids are OBSESSED with the JAWS movie. This JAWS Board Game was the perfect addition to our family game night collection. Thankfully Ravensburger agreed to send us their new JAWS board game – it’s the perfect gift for a retro film lover.

We’ve been to see JAWS at Universal Studios Hollywood, we’ve seen it on the big screen, reveled in the Amity Island area in Universal Studios Orlando – you name it we’ve done it. In fact several of the boys Christmas gifts this year have to do with JAWS. 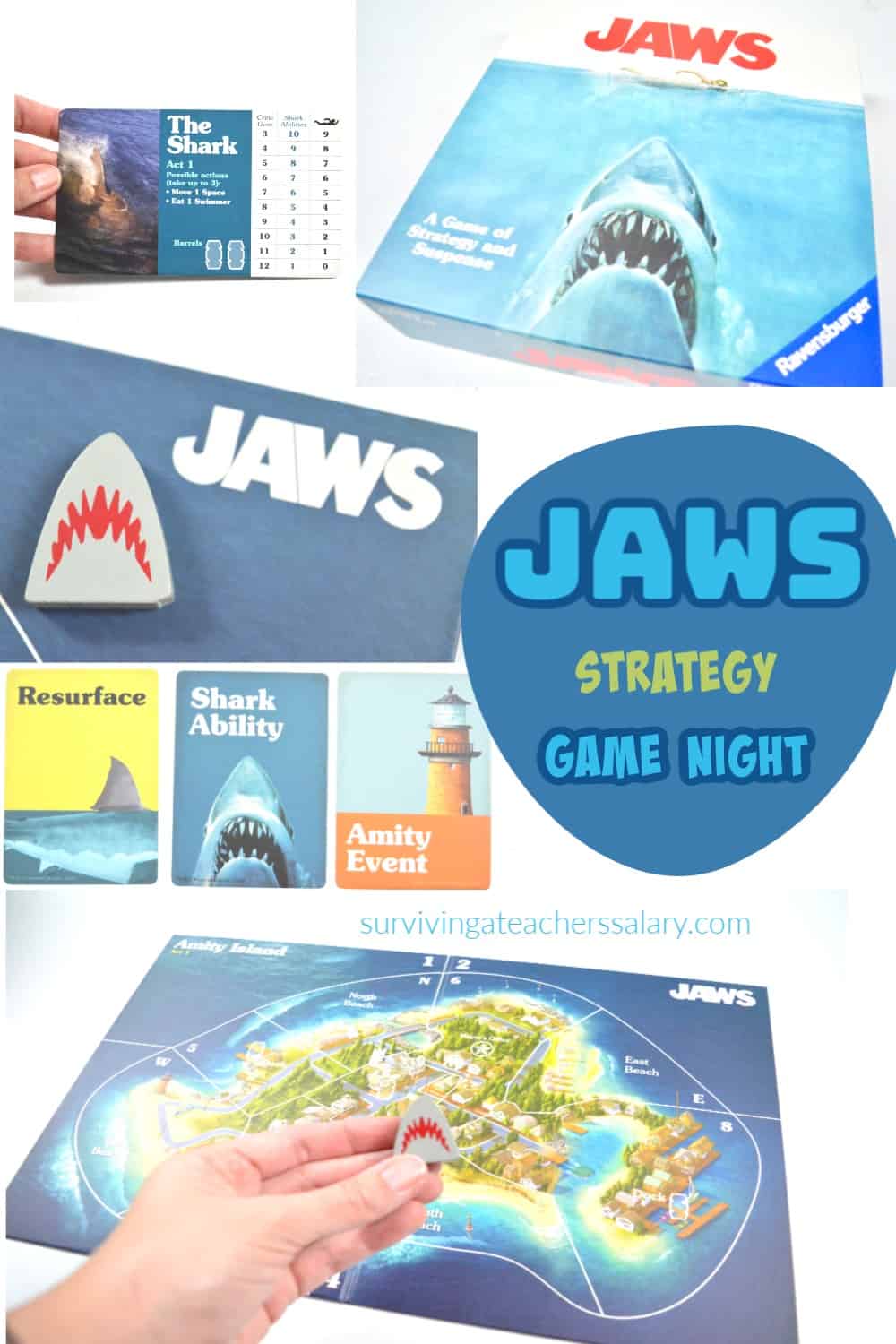 The JAWS strategy board game is geared for ages 12+, game play lasts about an hour, and 2-4 players can join in on the fun together. One player will be JAWS, and the others are part of the crew fighting the shark.

There are two Acts of this game. They can be played in the same game, or as individual games depending on how much time you have to play. The instruction guide lays out several modifications for the game depending on how many acts you are playing as well as a FAQ section for each Act. 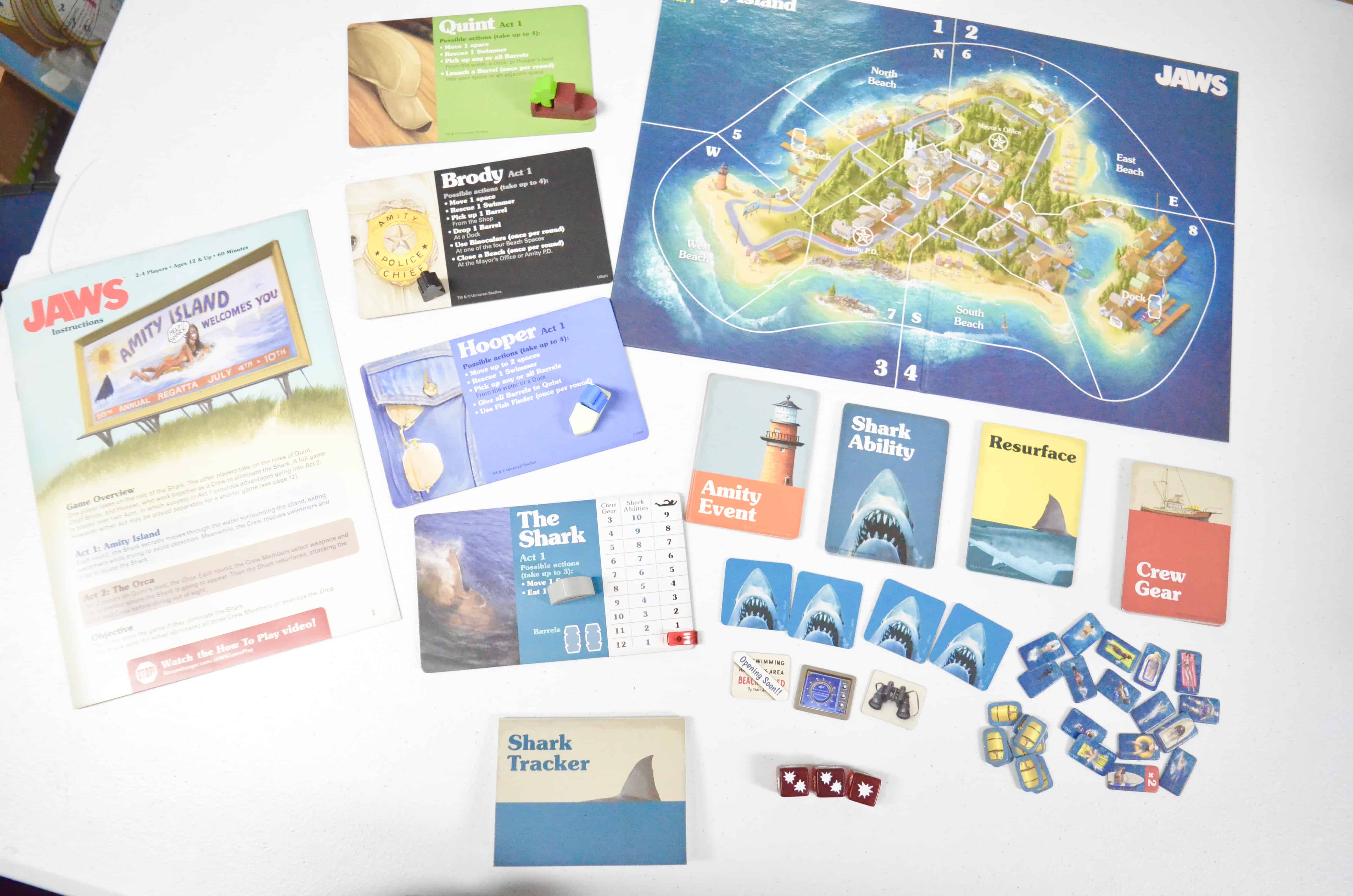 As a player you are either the Shark, Quint, Brody, or Hooper. Each player has a corresponding piece and matching character board. Just as with Horrified: Universal Monsters, this post will not explain every single detail and scenario of the game but will give you a great outline of understanding on how the game is played.

A 15 page instruction booklet is included with the game that I recommend spending time reading and practicing a few rounds.

This JAWS board game is a LOT of fun and is a great family game for those that love JAWS! Don’t be put off by the long instructions below – JAWS is a GREAT game! There are a lot of moving parts to this game (as with any good strategy game) but I love that you can choose to play one or both acts and just need to flip the game board over. This is helpful if you start a game at night but start to press up against bed times.

JAWS by Ravensburger is just one of many games featured in our Game Night Gift Guide!

What’s inside the box?

Take 2 Barrel Tokens and place them next to your Character Board card. (The remaining Barrel Tokens are placed on the Shop in the center of the board.) Place your green Quint piece in the Orca maroon boat piece at the dock.

Take the Beach Closed Token and the Binoculars Token with your Brody Character Board card. Place your Brody black piece at the Amity P.D. (section 6)

Take the Fish Finder Token with your Hooper Character Board card. Place your Hooper blue piece in the white Boat piece at the Dock. (section 5)

Grab your shark piece and The Shark Character board. Attach a clip to your character board card and slide it into the 0 slot at the bottom of the Swimmer Track. Also take the four Power Tokens. Do NOT place your shark piece on the board game. Power tokens can be shown to other players. However do NOT give the crew your starting location. Your Shark Tracker Pad should be kept secret from the crew. 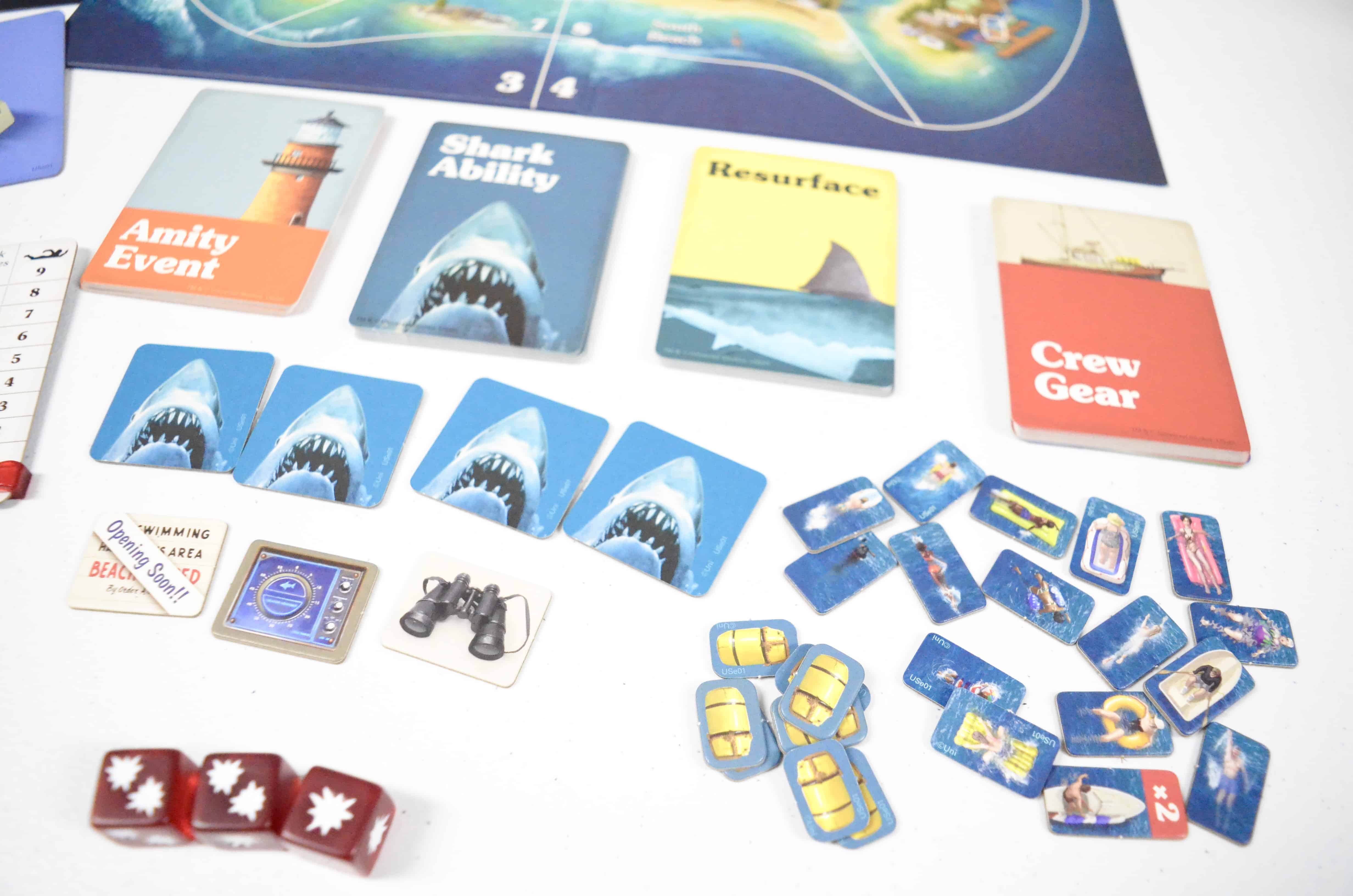 For each act of the game (side of the game board) both the shark and the crew have separate objectives.

Objectives of the JAWS Board Game:

Shark Goal: Eat as many swimmers as you can avoiding detection by the crew.

Crew Goal: Locate the shark, attach two barrels to it, protect the swimmers.

Phases of the JAWS Board Game – Act 1:

Read the event card and follow the instructions given. Do NOT place Michael (Brody’s son) Swimmer Token unless an event card tells you to do so.

The shark can take up to 3 actions and use one Power Token in any order. Move through the water – you CANNOT move through land or diagonally. Eat 1 swimmer. Do NOT tell the crew your actions – this is secret! Record it in your Shark Tracker Pad.

NOTE – You’ll tell the crew how many swimmers you ate and at what beach. Remove the swimmers from the game board and slide your clip up on your Swimmer Tracker. If you reach number 9 then Act 1 ends immediately. You must inform the crew of any Motion Sensors or floating barrels you trigger. You can also let the crew know if you used a power token but NOT which one.

EACH Crew Member can take up to 4 actions in any order but must take all of their actions before another Crew member starts their turn. Actions each player can take is found on their Character Board.

One of the two following actions will end Act 1: 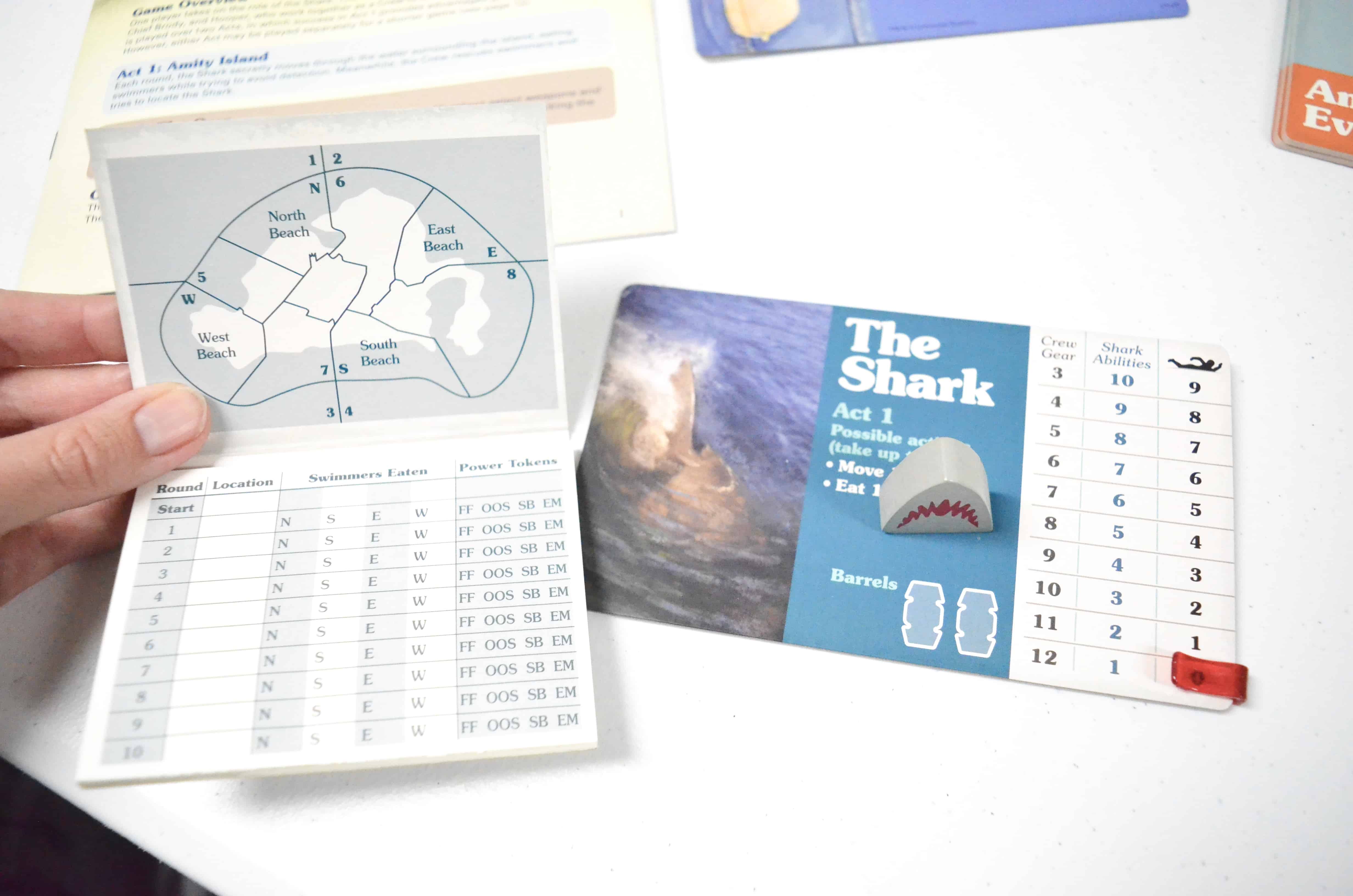 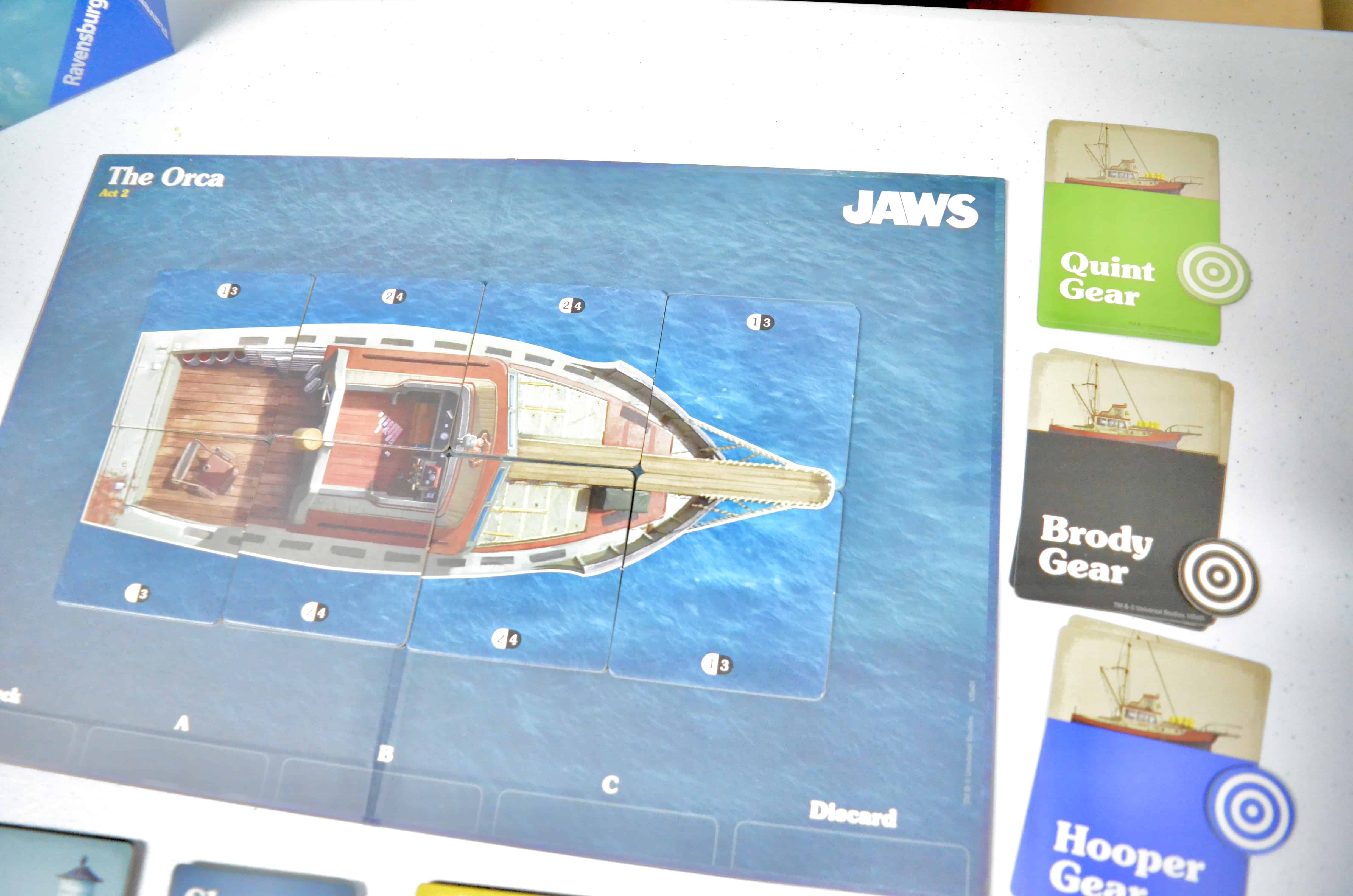 Rounds of the JAWS Board Game – Act 2:

When does the JAWS board game end?

One of the three following actions will end Act 2:

This JAWS board game does an awesome job of pulling you into the movie! You get to choose how you act out every scene – right up to the not knowing where the shark is swimming! It’s a fantastic game choice for any retro film lover! 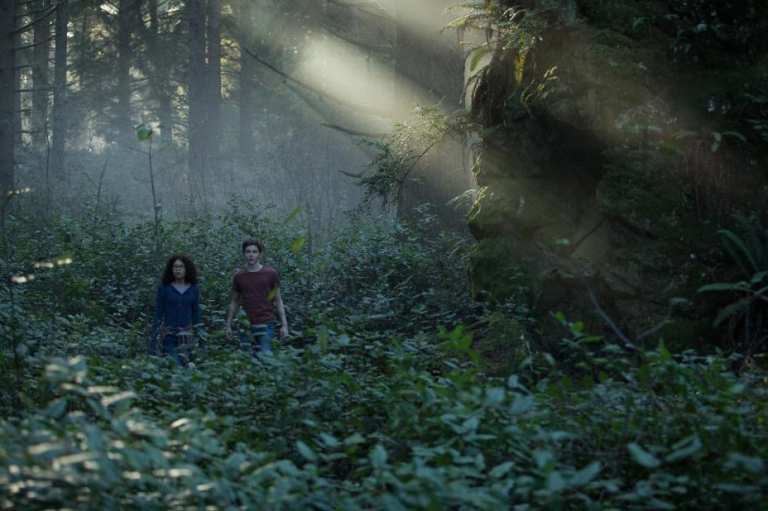