↑
Home » Who’s Riding On the Bus? – A GREAT Game for Kids!
This post may contain affiliate links, view my disclosure policy. 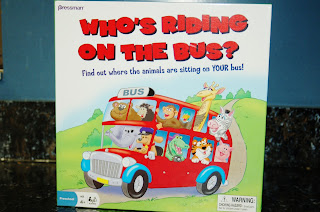 I had the awesome opportunity to meet the Pressman Toy company at BlogHer’11 in August. They have some great educational games and products! Recently they contacted me asking if I would review “Who’s Riding on the Bus?”

– which has just won an award from Dr. Toy this year!! (Congrats Pressman Toy!) This is a two player game and is a fantastic choice if you’re working on copy and design skills with your child (which we are) or have kids who thrive on timed competition. 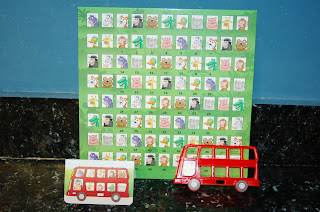 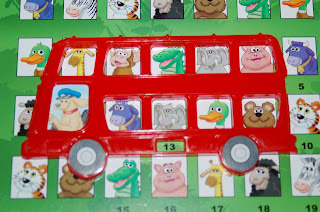 When you think you have filled your bus windows with the correct order of animals as is found on your bus card, you’ll see a number in the window at the bottom of the bus. Above you see the number 13. You may then look inside the filled bus card and see if the number 13 is written inside. If it is correct than you’ve won!! 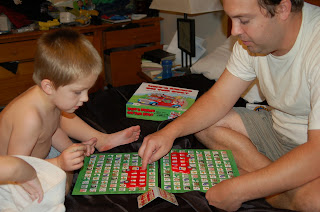 My son is 4 years old and struggles with design and copy, which is being able to look at one thing (such as the bus card) and be able to copy it accordingly somewhere else. It is something that we have been working with him on for a while now, and when we played “Who’s Riding On the Bus?” he loved it even though it was a little difficult for him to find it!
For him it was a fun challenge that he could win at, it wasn’t a chore! For kids who don’t have an issue with design and copy they would love this game! Kids usually LOVE timed games, competition, and even the strategy behind the game! This is such a simple idea of a game but really a lot of fun! I recommend this game to anyone with younger kids – they will love it! Definitely no younger than 4 years old though. The game says 5+ and I think that is a good range.
The Pressman Toy company was founded in 1922 by Jack Pressman and is now run by Jim Pressman. I love companies that are family-run!
Disclosure: I was not compensated for this review. I received a game to try in order to form my own opinions. All opinions are my own.