↑
Home » games » How to Play the Horrified: Universal Monsters Game by Ravensburger
This post may contain affiliate links, view my disclosure policy.

Ravensburger sent us their awesome new Horrified: Universal Monsters game which pays tribute to some of these classic monsters. We are huge Universal fans in our household, but it’s not just about the amazing theme parks and rides!

Universal Studios has been a pioneer in the classic horror genre and produced some of the most well known films in the 1920’s-1950’s. A simple Wikipedia search will procure a huge list and I’m betting you’ll recognize most of them. 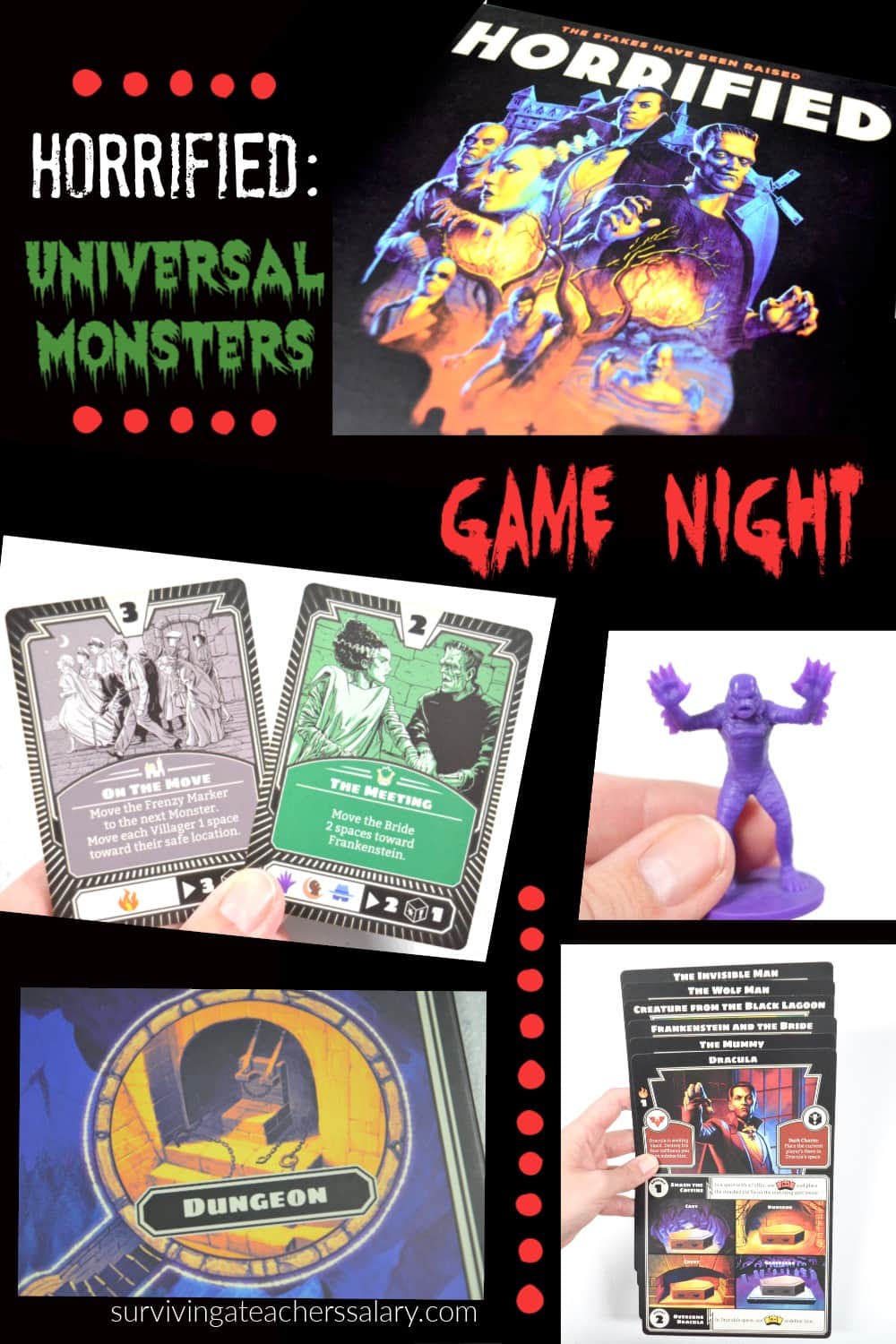 Horrified: Universal Monsters is a cooperative strategy board game for ages 10+ and takes about an hour to play. The cool thing is that not only can you play with up to 5 players, you can play by yourself too! 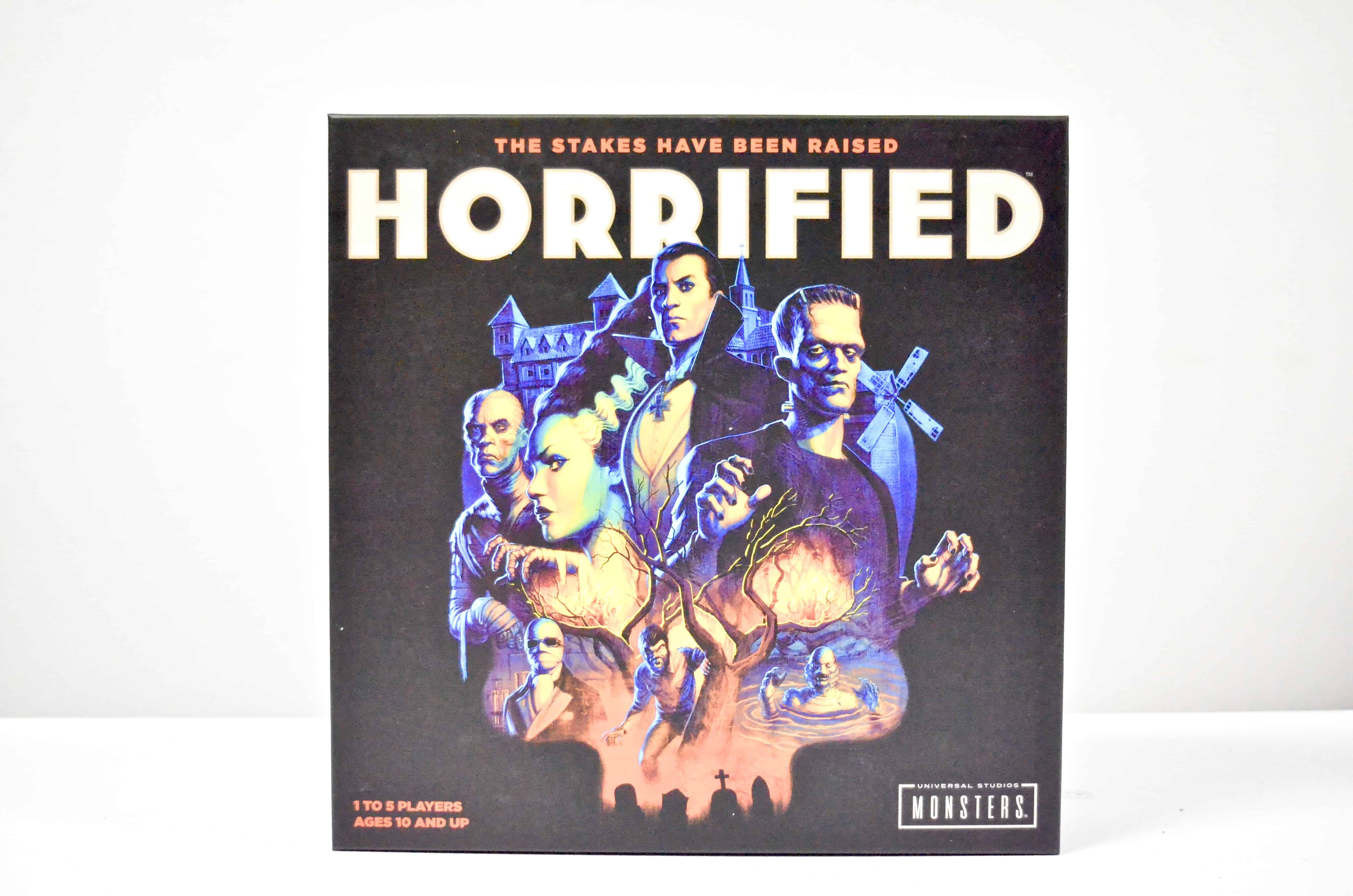 Don’t be fooled – this game is EXTREMELY in depth! In fact it includes a 15 page booklet full of instructions on how to play! This post will not be able to give you every single detail of how to play the game but simply an overview and basic understanding of it.

I highly recommend spending some time reading through and practicing before beginning to play real rounds of this game! Watch some YouTube videos too! It’s absolutely worth learning how to play, but it’s not your typical “open and play right away” game! 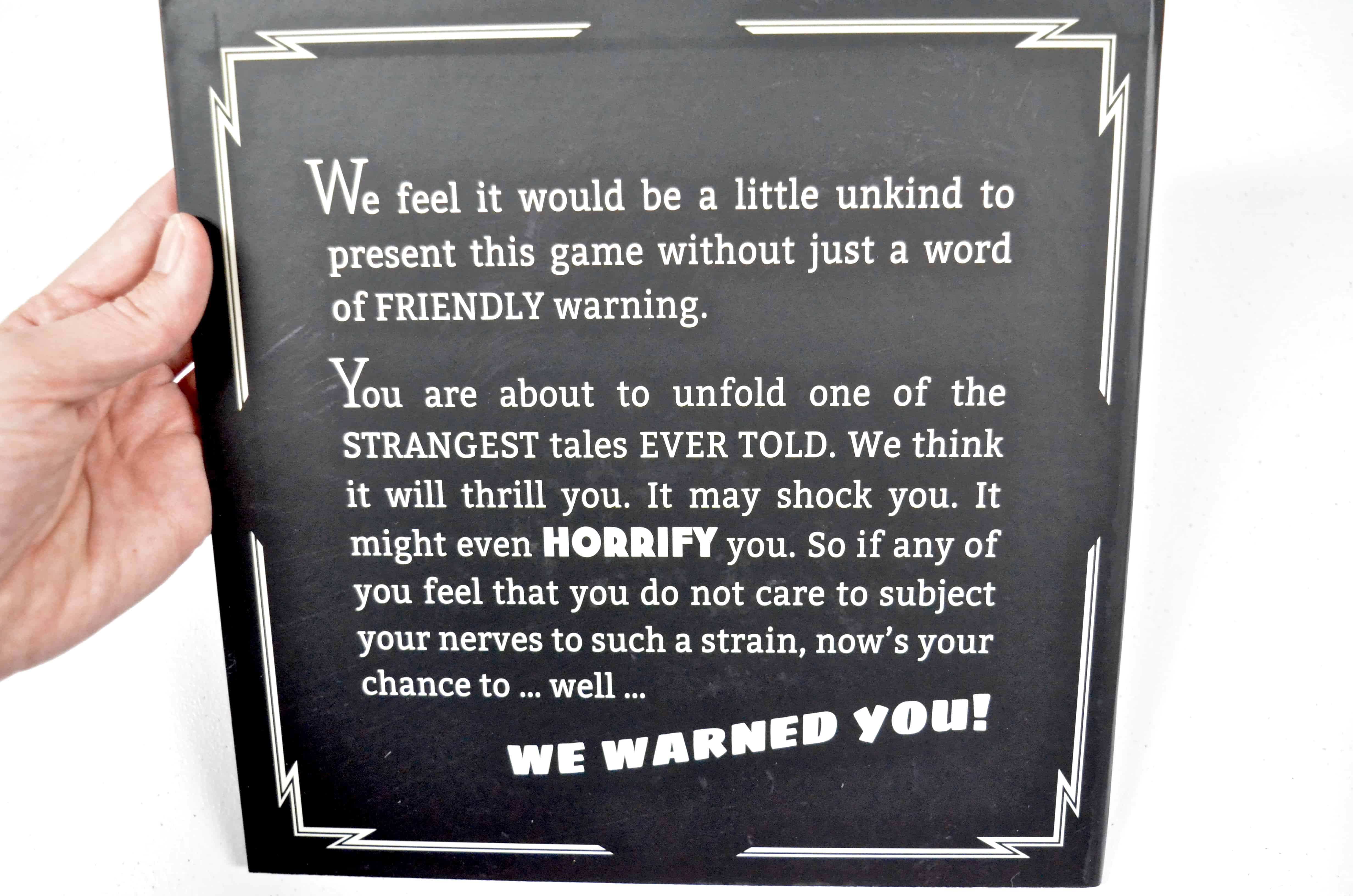 True to classic monster form – there is always an ominous warning, and Horrified: Universal Monsters is no different! Be forewarned. 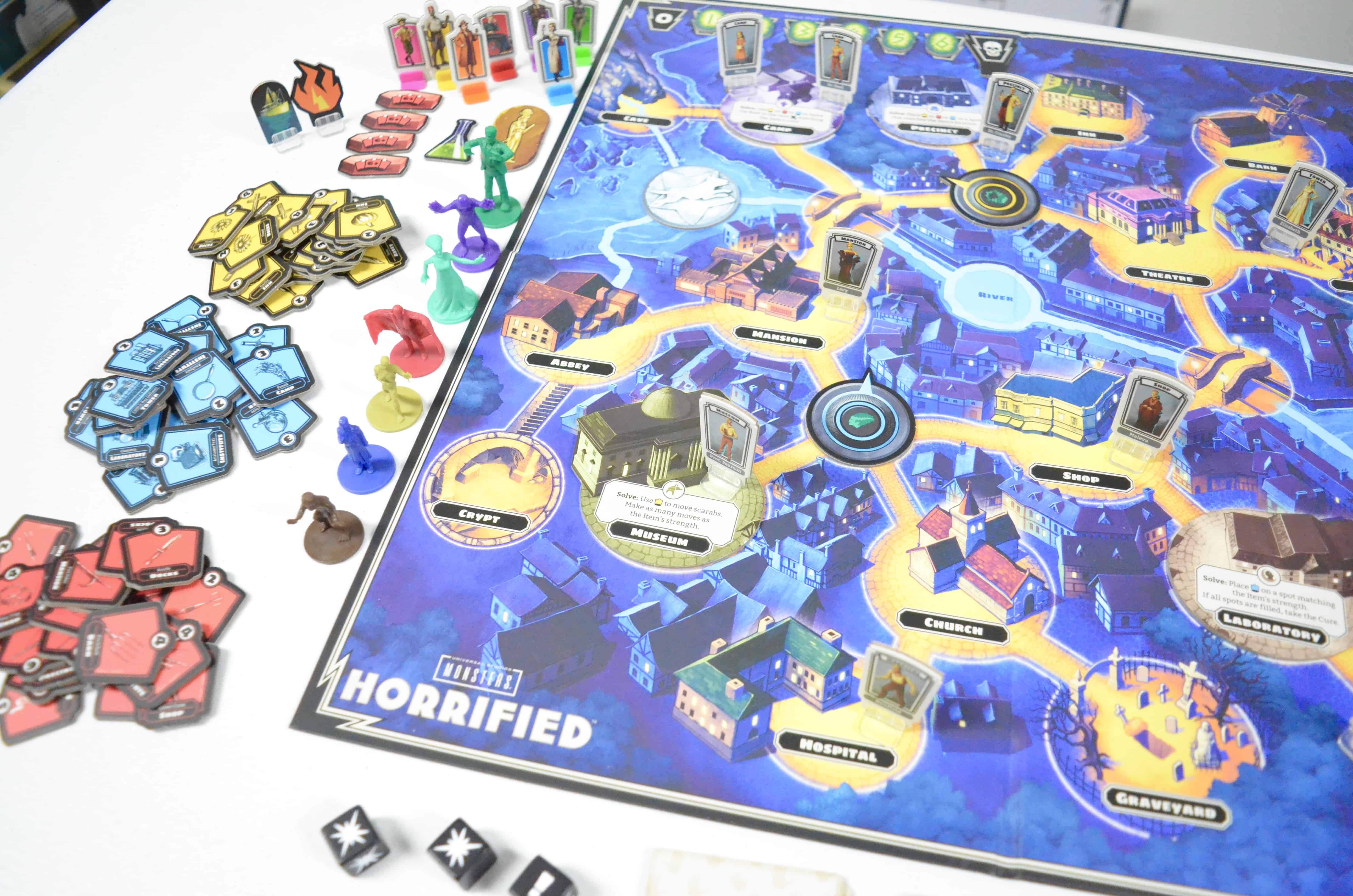 As you can see there are a lot of moving parts to this game and a ton of pieces. This may feel daunting but it’s not as bad as it seems! Take the basic outline in this post to understand the overall concept of the game then do a few practice rounds to understand each monster and step in the game.

What’s inside the box? 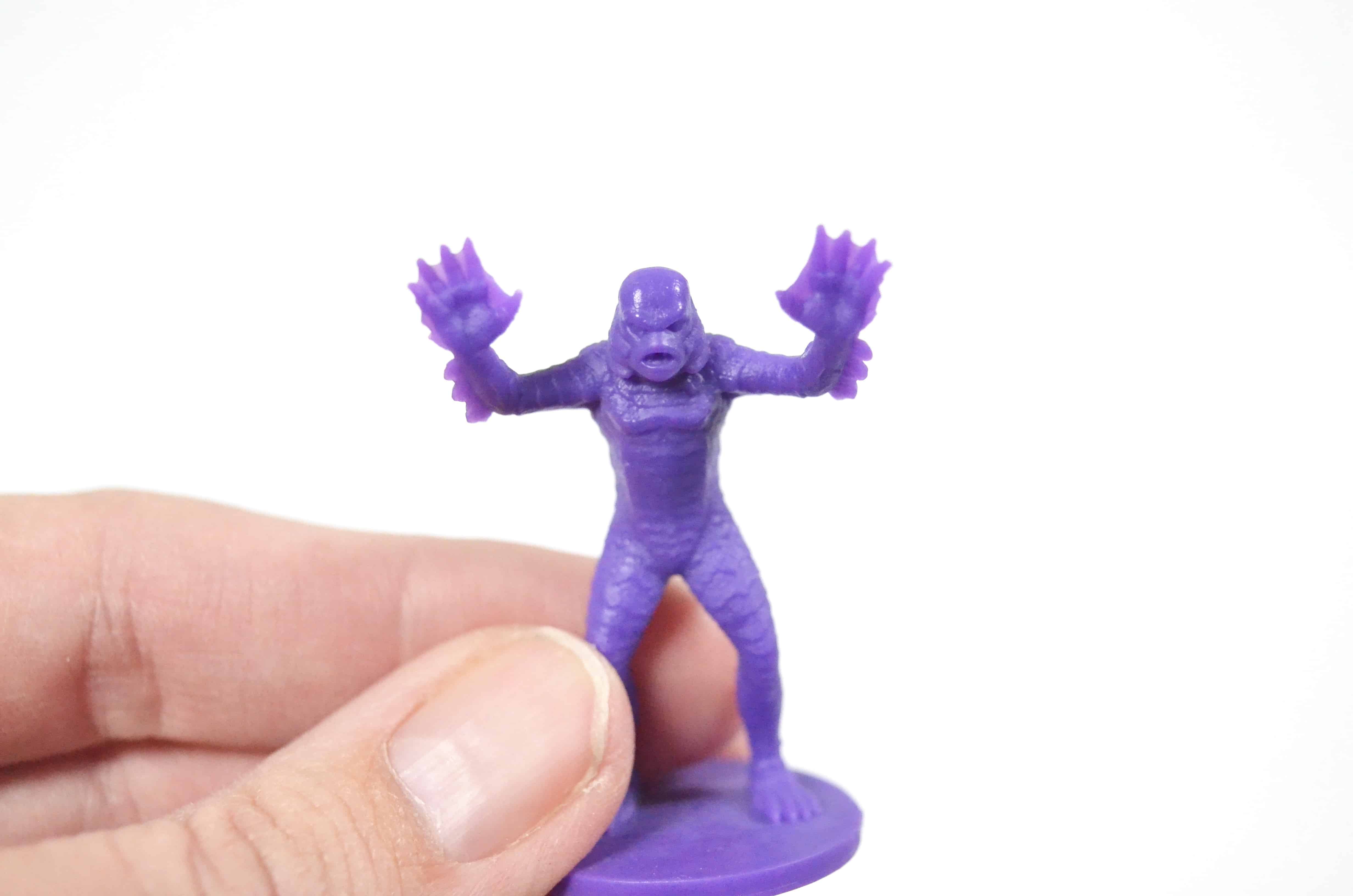 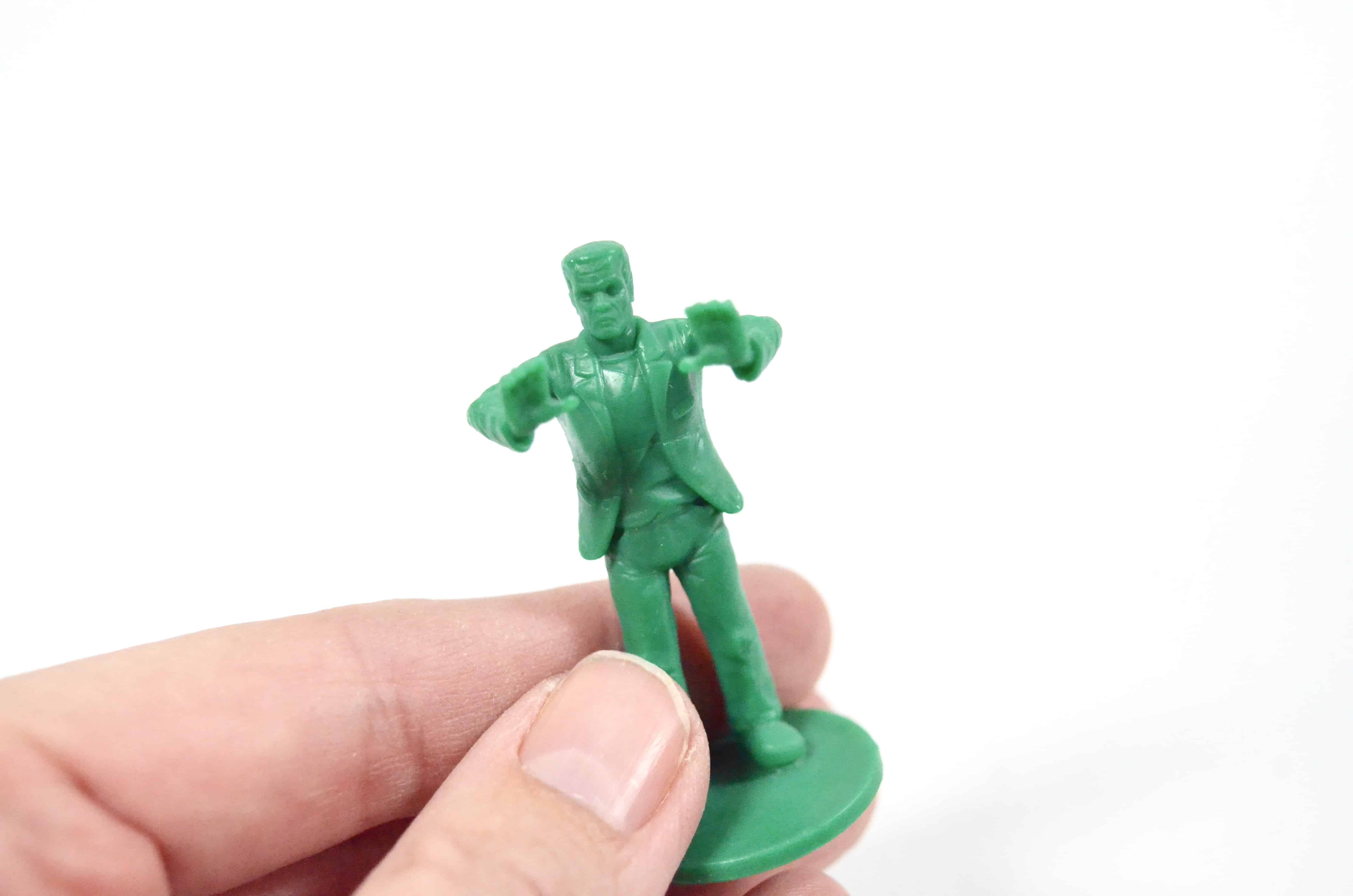 Included in the game are seven paintable, high-quality sculpted miniatures: 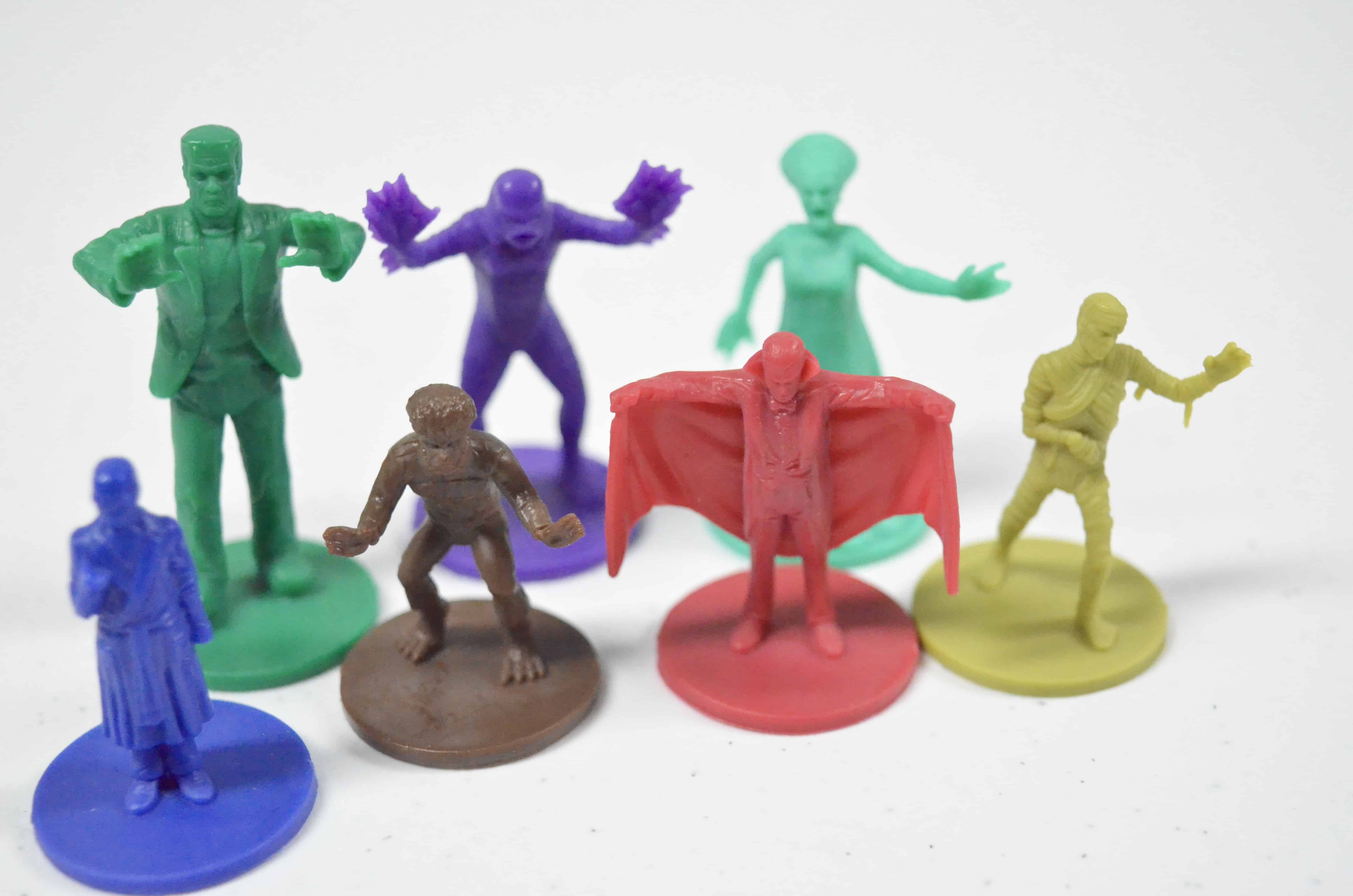 Because this strategy game can be played in a variety of ways with varying number of players, Horrified has a varied level of difficulty as well depending on how many monsters you are playing with.

Each monster provides different challenges. To begin at the easiest level you’ll start with the Creature from the Black Lagoon and Dracula. 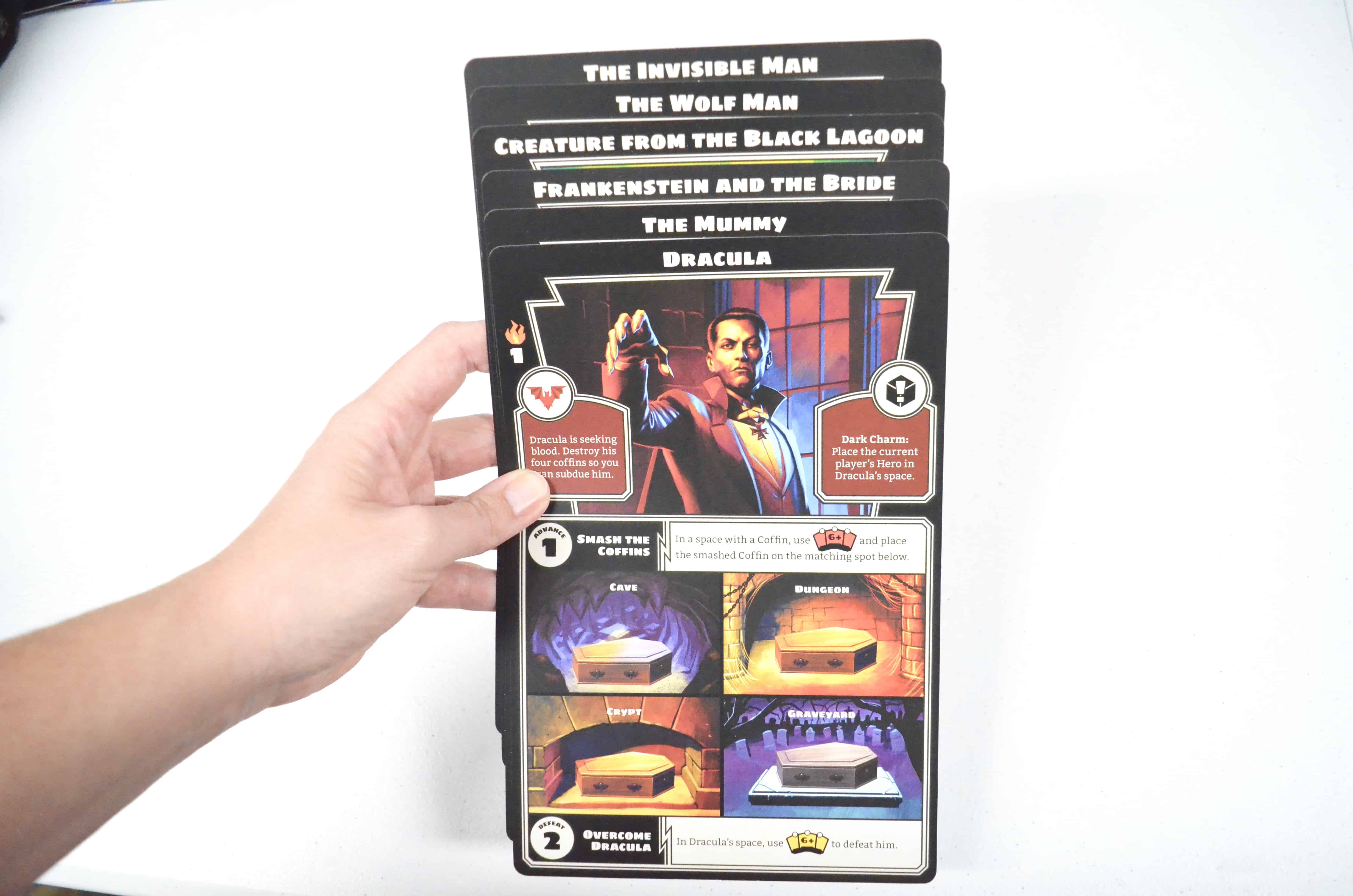 How to Play Horrified: Universal Monsters with Just One Player:

Since you are playing by yourself, the Villagers are more frightened with only one hero, so you must begin the game with the Terror Marker on 3. (Top left hand side of the board.) All of the remaining rules stay the same however you cannot use a hero’s Special Action or the Perk Cards: Special Delivery & Conduct an Investigation. Simply remove the perk cards before you begin playing. 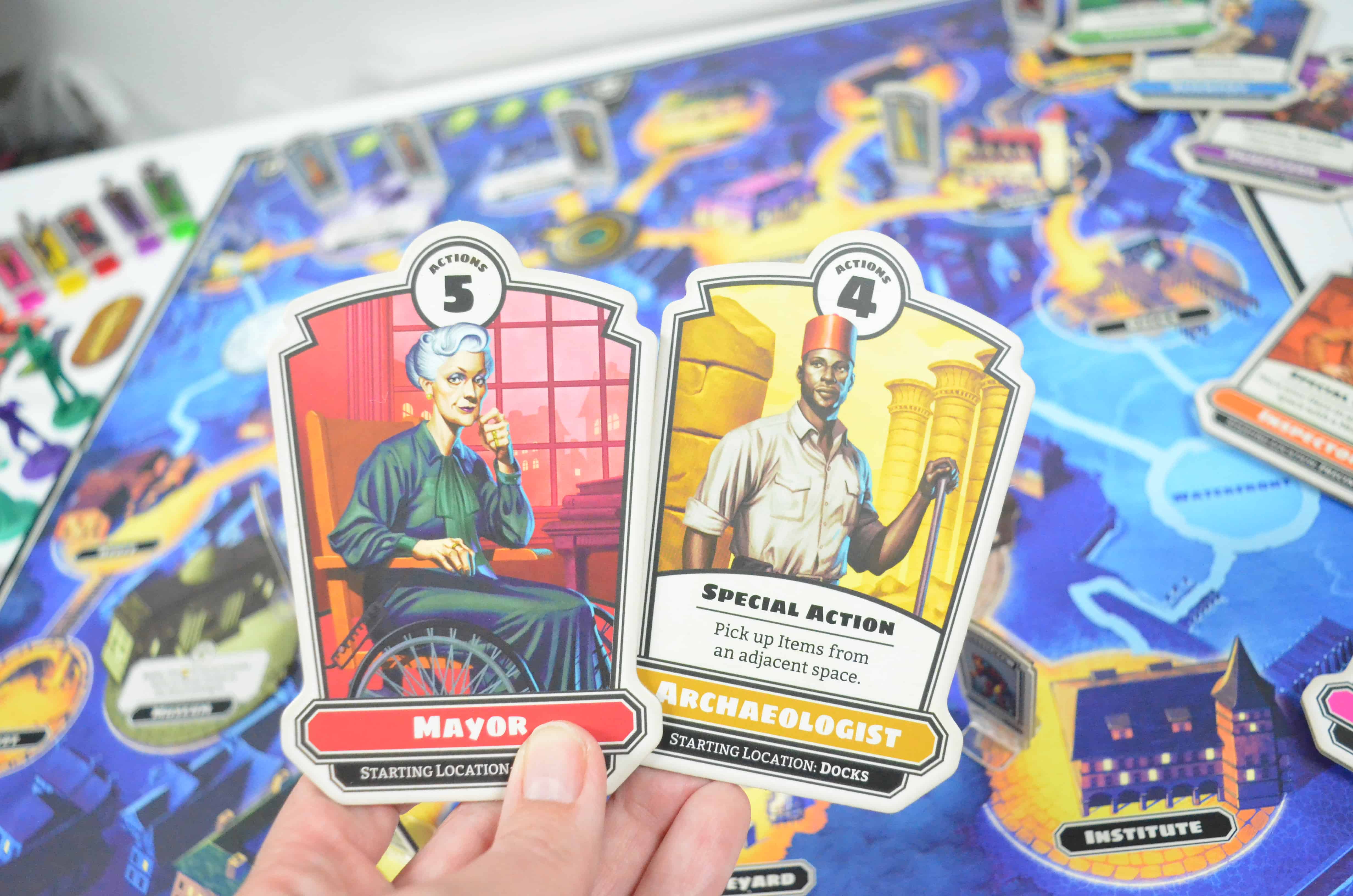 Each player receives a hero badge, corresponding hero mover, reference card and random perk deck card. The hero badge will tell a player where to begin. Above you can see that the Archaeologist has a starting location at the DOCKS. Some hero badges allow that hero to have special actions, like the Archaeologist can “Pick up items from an adjacent space.” while the Mayor has none.

How do you decide which player goes first?

The player who most recently ate garlic takes the first turn. After that you move in a clockwise direction. Remember this is a cooperative game which means you either ALL win or you ALL lose. You are working together to defeat the monsters!

Every turn has two phases:

What are the colored Item Tokens used for?

Each colored token has an important use and task for defeating monsters and/or defending yourself from monster attacks. Above you can see the type of token designated by color.

The number located at the top of the colored item tokens represents its strength value which may be beneficial depending on the monster. Once you use the item token, place it in the discard pile unless the action tells you to place it on a monster’s mat. Do not put them back into the bag. 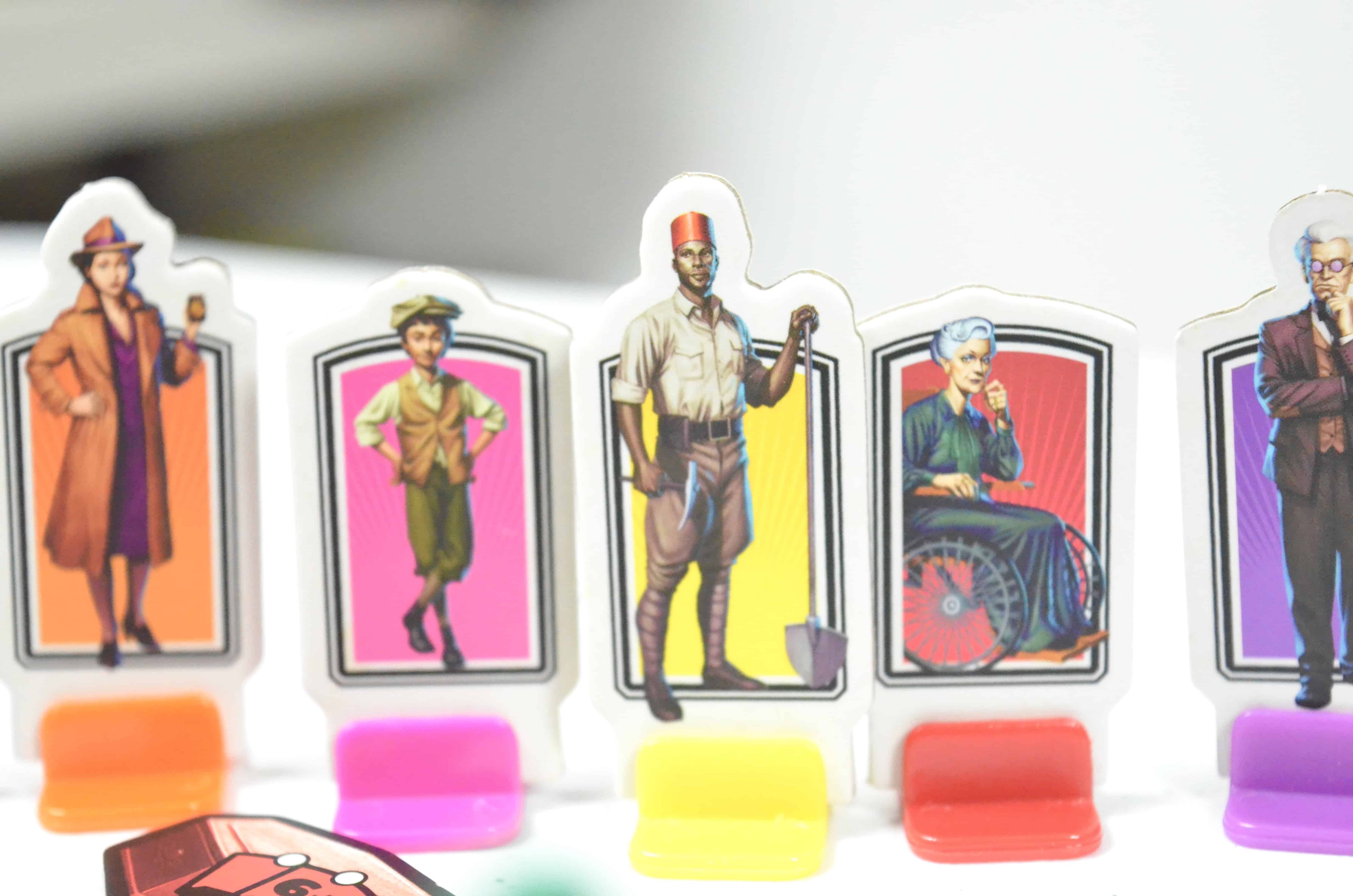 What happens when a hero is attacked by a monster?

When a hero is attacked by a monster and cannot recover, the Terror Level on the board is increased. The hero can later be re-spawned in the hospital. If the hero decides they can use their item tokens in exchange for their health.

What happens when a villager is attacked by a monster?

When a villager is attacked by a monster they die and are completely removed from the board. The Terror Level on the board is increased. 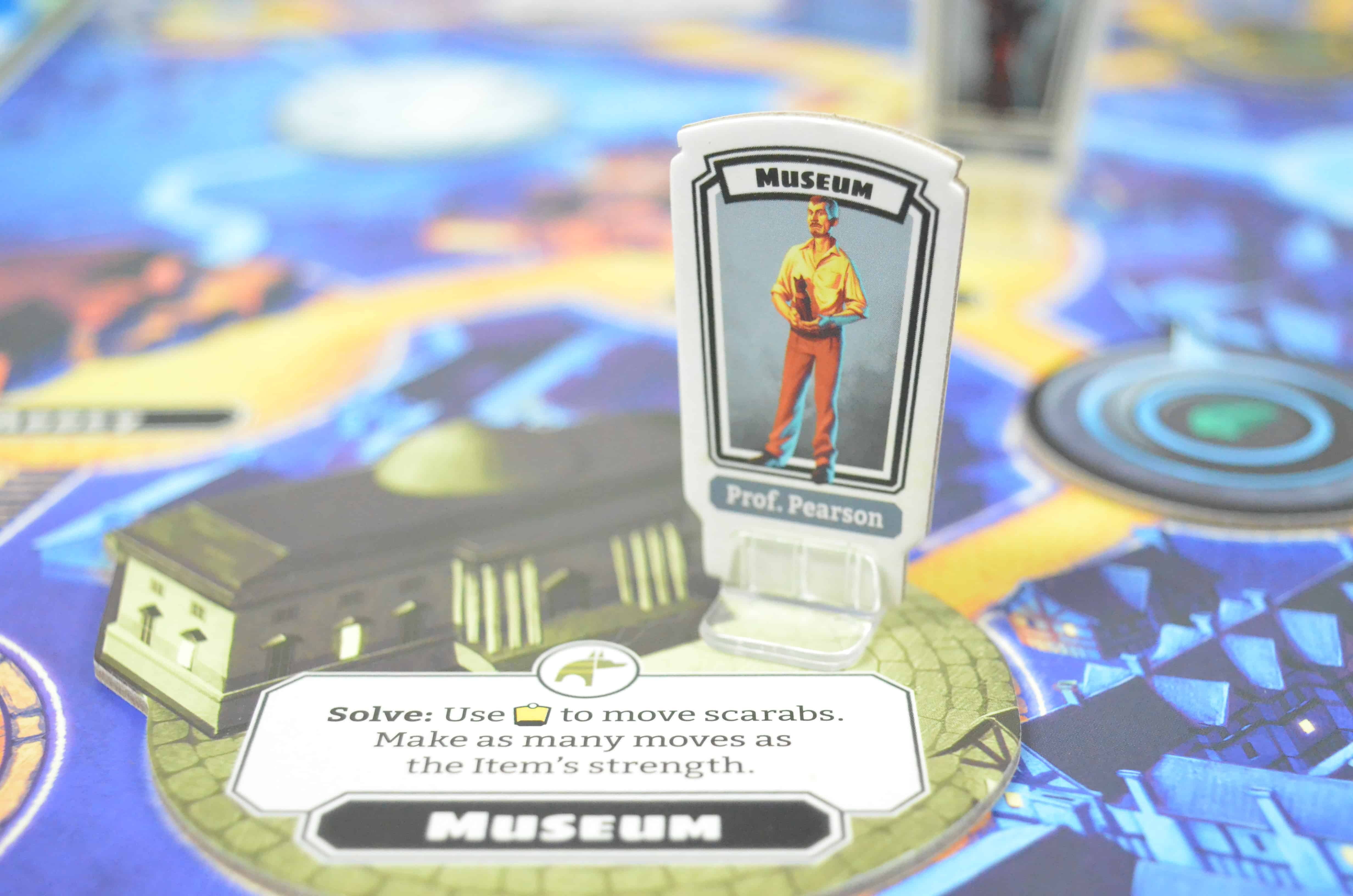 When does the Horrified: Universal Monsters game end?

One of the following three things must be met to end the game:

It really brings your love of old monsters right into your home in a deeper way than just watching them on tv.