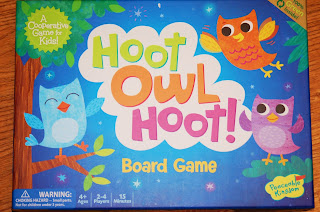 Hoot Owl Hoot, a new game that has just been launched by Peaceable Kingdom Press

, is a brightly colored game geared for ages 4+ years old. The great thing about this game? There is NO reading required so any age can play! The other great thing is- it’s a cooperative learning game! 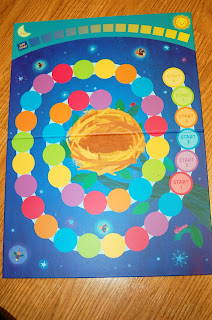 What exactly is a cooperative learning game?
A cooperative game is a game where ALL players play TOGETHER to meet a common goal, or in this case- win the game! Instead of the traditional games where you play indiviually to win, everyone has to play together to win- you either ALL win or you ALL lose! 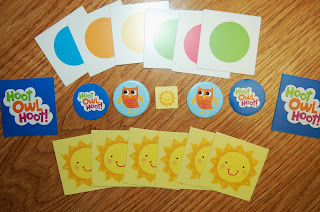 The object of the game is to work together as a team to get all of the owls home before the sun comes up!

If a child has a sun card, you must move the sun forward. All colored dots will determine where the child can move next on the board. Because it’s a cooperative game, no single player ‘owns’ a particular owl. They must all work together to get all owls back to the nest. 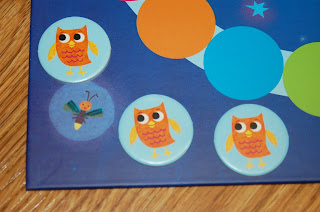 The great thing about this game is that if the children playing are older, than they can actually work on a strategy together to maximize the benefits of their owls moving forward. If an owl is on a specific color, the next owl that draws that color is able to ‘jump’ over the owl that is already there, thus making it easier to move the owl further. 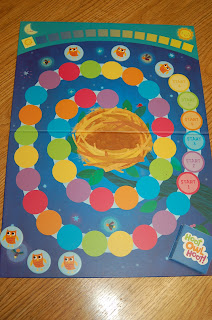 All of the games I received from Peaceable Kingdom Press were sent over to my husband’s elementary school to try out in the classroom. They were put into K-5 through 2nd grade classrooms. This particular game went into the 1st grade classroom. One very interesting thing that the teacher noticed with her students was that although the upper leveled kids caught on to the rules quicker, the lower leveled kids always won. When the higher leveled kids played together they were not able to win. She thinks it is because they were so used to things coming easy for them, they didn’t take the time to think out a strategy together. Whereas the lower leveled kids thought about each move- they were able to form a better strategy together. So this was a great game for them to not only work as a team but also for each individual to put a little more thought into the game as well.

As an added plus- this game, as well as Peaceable Kingdom Press’s other Cooperative Learning Games are all printed with FSC papers & soy-based inks. It’s 100% green!
You can learn more about Hoot Owl Hoot and order your own on Amazon.
Disclosure: I was not compensated for this review. All opinions are mine & the teachers involved. I received a game in order to form my own opinions for this review.