We drove to Colorado last weekend to spend the week with my sister and her family and it has been one heck of a week! We celebrated my 30th birthday, our 9th wedding anniversary, and unfortunately witnessed the #BlackForestFire – the most devastating fire in Colorado’s history. Although we have not been in immediate danger from the fire we are about 2 miles from the evacuation zone and have been on constant alert in case the winds change.

360+ homes lost, 18,000K burned, and an evacuation zone larger than the size of Denver. It has just been heartbreaking to see although the kindness of local businesses and residents have been astronomical. Much of the week we were stuck indoors due to the smoke.

Two days before the fires began we visited the Royal Gorge which has since been almost completely destroyed in the fire. I almost cried while writing my review knowing that it was all gone. They seem very optimistic and already have plans in place to rebuild! On a day where the smoke wasn’t as bad we also decided to visit the Cheyenne Mountain Zoo since we were all getting pretty stir crazy stuck in the house. It’s a small zoo but a fantastic one! 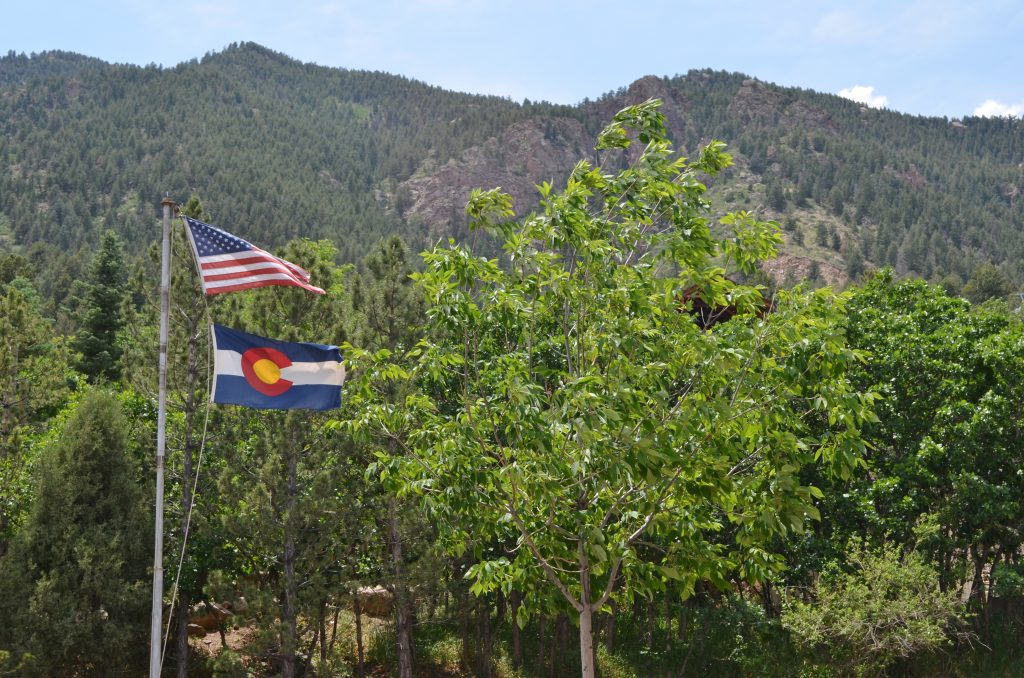 When we first arrived I immediately spotted the Colorado flag and American flag and thought this was a great photo considering the devastating fires that are spreading through the state. 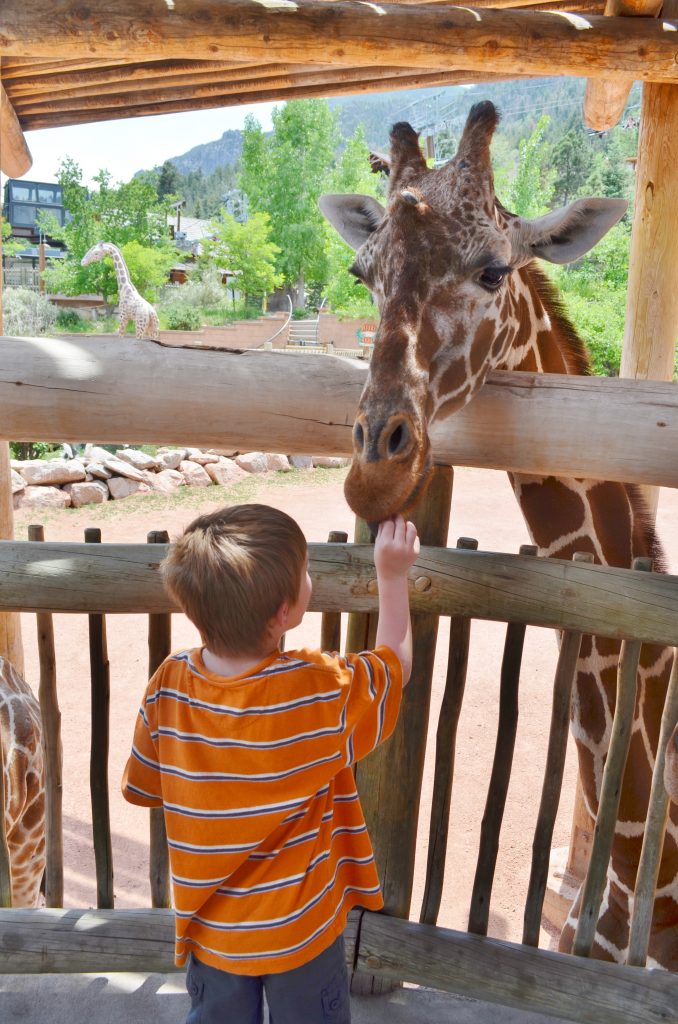 I have been to many zoos across the country but so far the giraffe exhibit at the Cheyenne Mountain Zoo is by far the BEST! The height for small kids was perfect to feed the giraffes and it was VERY inexpensive to feed them! ($2 each)

PLUS the giraffes are SUPER friendly and you are pretty much guaranteed to always have a few giraffes there to pet. That certainly beats the zoos where the giraffes seem like they are allergic to people and won’t come near by (you know what I’m talking about!)! Plus there were a TON of giraffes and they are right there when you walk in the zoo! 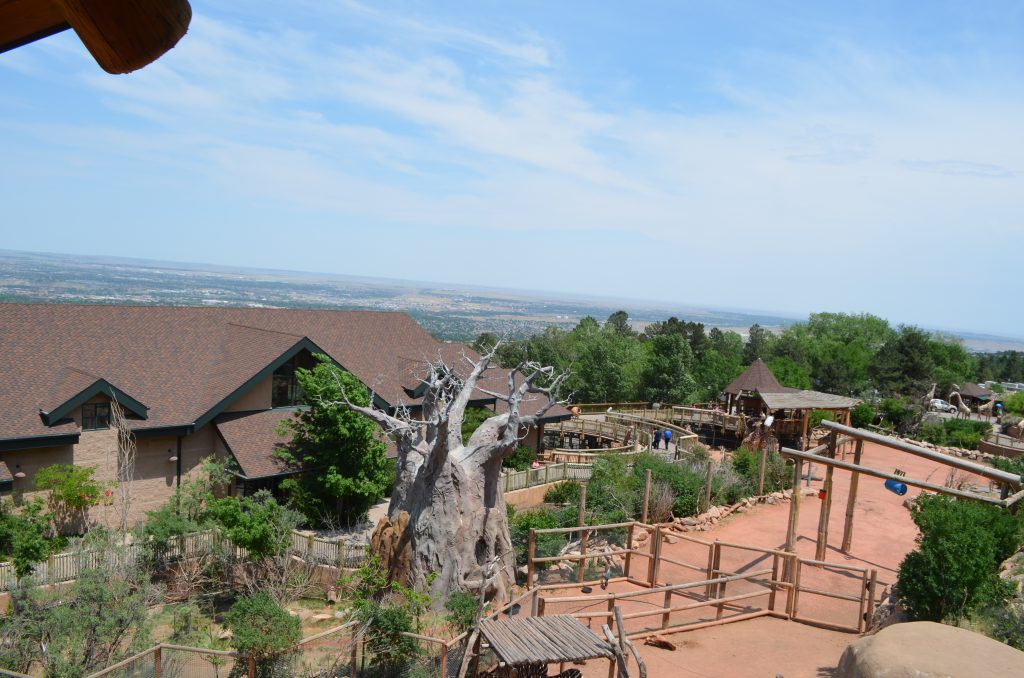 For those of you like me who have pretty much lived at sea level all of your life this zoo is a tough climb. A LOT of steep hills high up in the mountain to climb which are tough with strollers. So just be forewarned – bring an inhaler and some serious walking shoes! 🙂

But the views are spectacular and you can look out over the vast horizon into the city below. 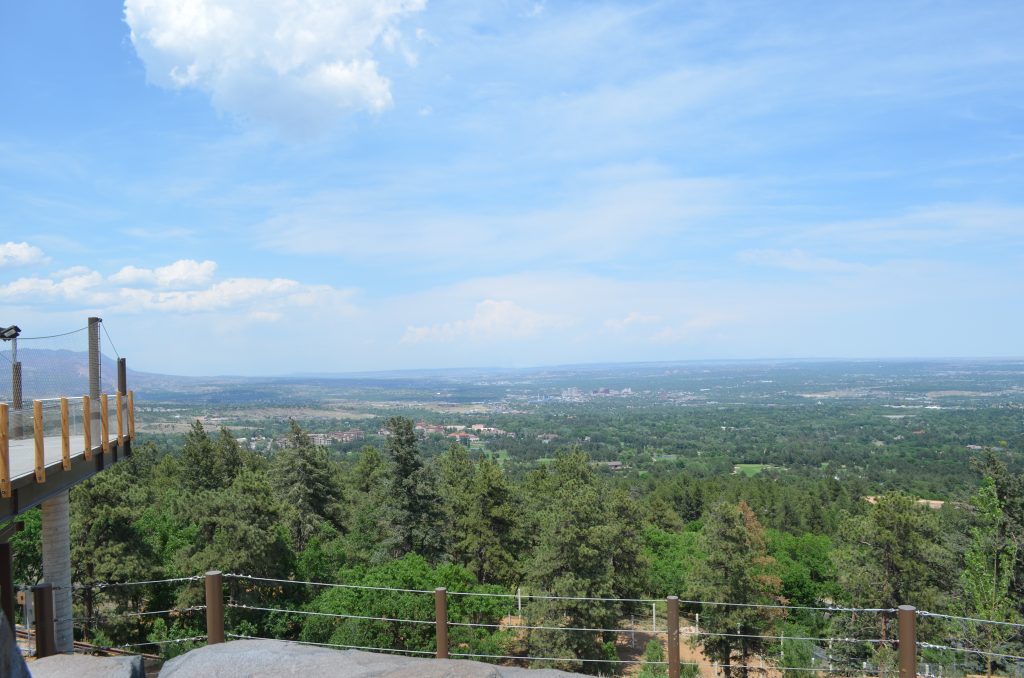 This is up by where the elephants are. It’s a stunning location for a zoo to be situated and just absolutely beautiful. 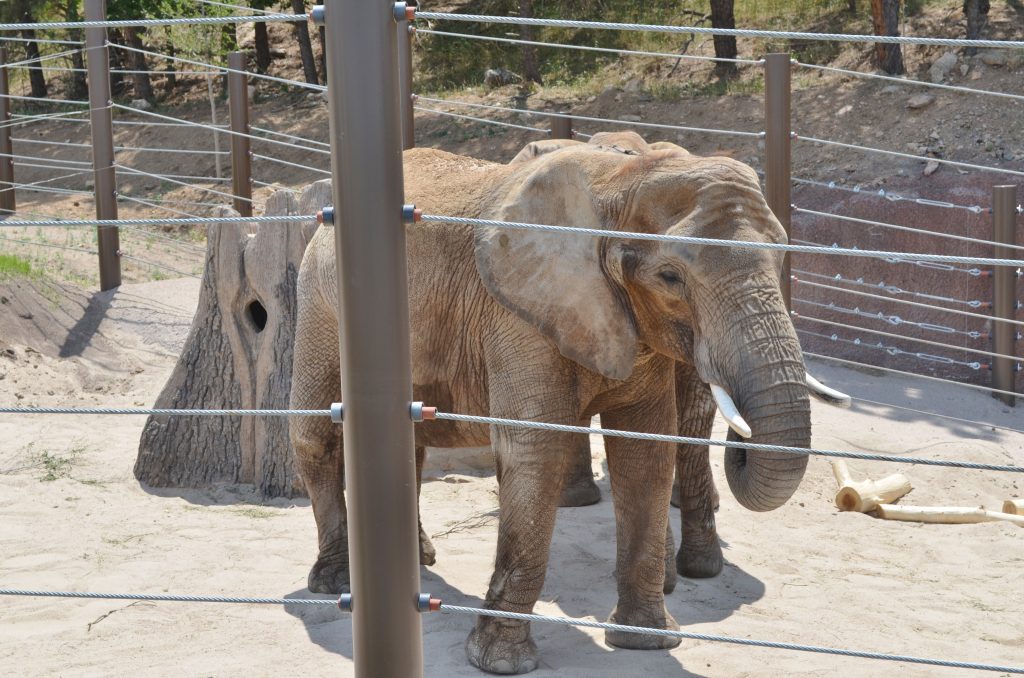 There were many baby animals and all of them had plenty of room in their areas to play. Everything was very clean and well kept. 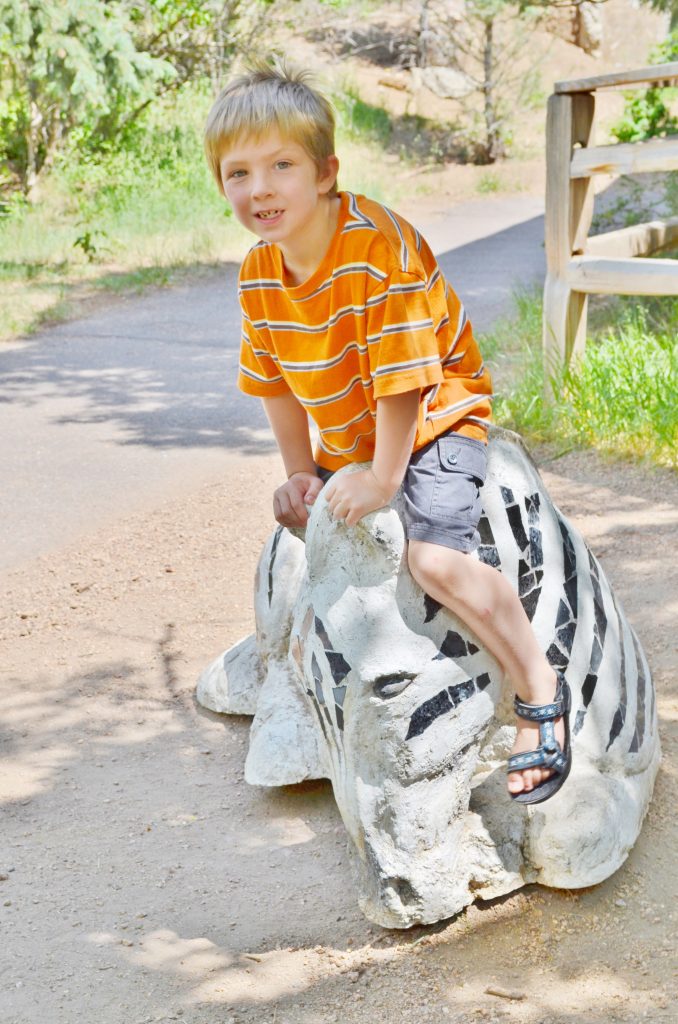 The kids we brought ranged from 2 years old – teenagers and they all had a great time. 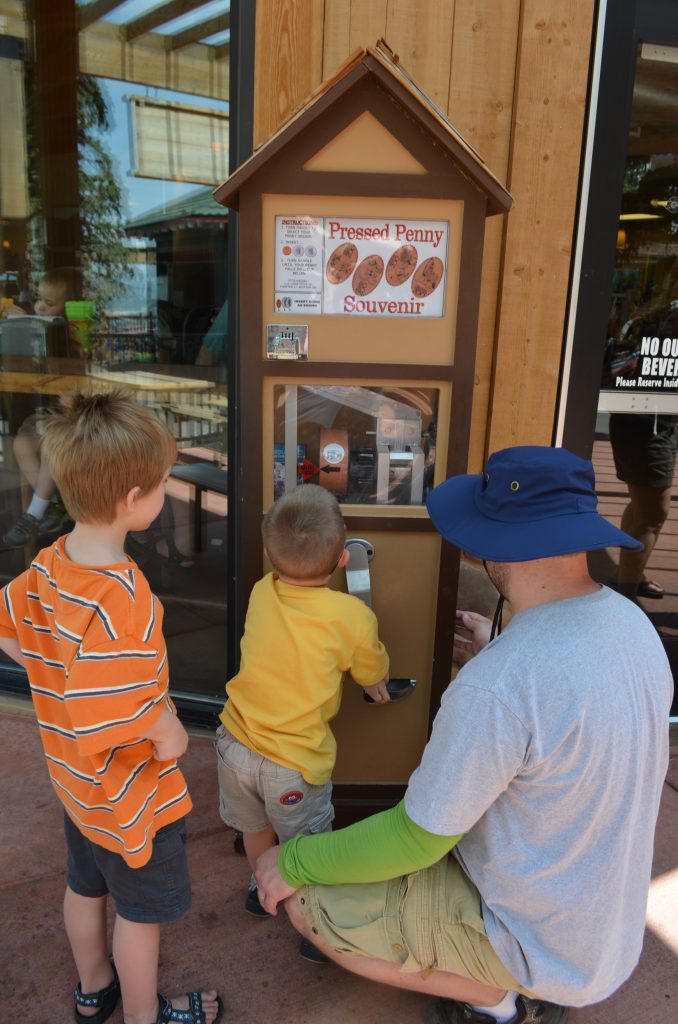 One souvenir that we get our kids everywhere we go is a pressed penny. They each have a special pressed penny book and they can chose whichever design they want to remind them of all the amazing places we have been. 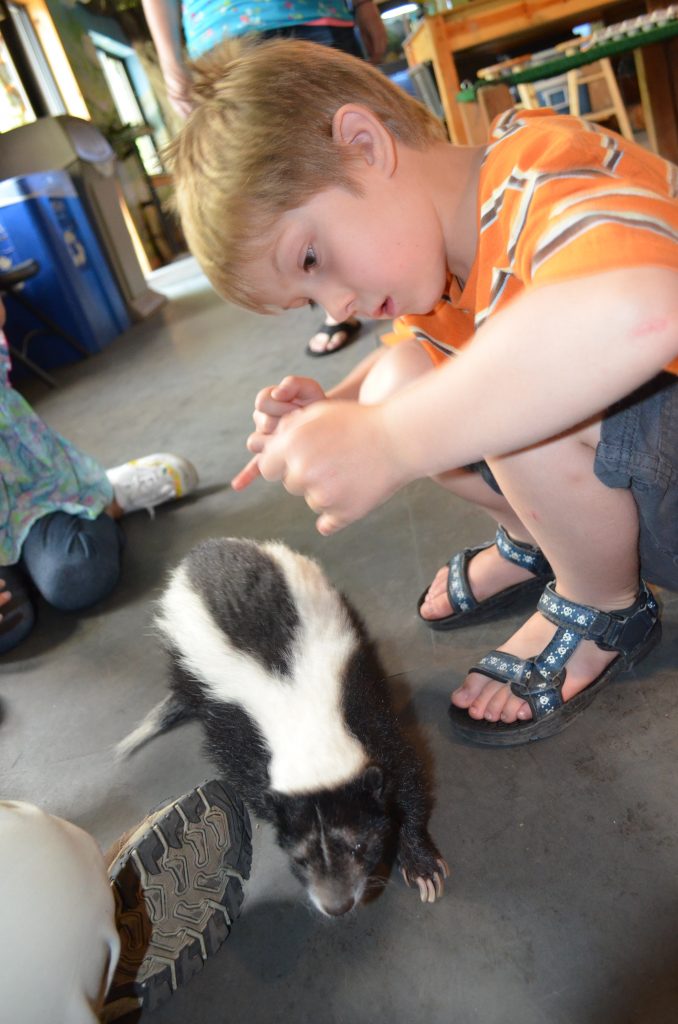 We spent a lot of time in the Reptile House which as you can see housed more than just reptiles! 🙂 My son’s favorite animal was this cute little skunk called Tiger Lily. She was so sweet and I thought it was awesome that they let her walk around the room to be pet!

They also had a talking parrot named Mister, and a raven named Po that did tricks! And of course there were all sorts of other reptiles and amphibians from frogs and toads to scorpions and lizards and snakes! There was even a prairie dog there too!

We also went on their Sky Ride which I didn’t think looked so high up from the ground but I am just terrified of heights and will never ever ever ride this again! LOL! This picture may look like I’m smiling but I’m not – I’m grimacing!

Look how tightly I’m holding my son in the yellow shirt – poor kid! Not to mention that it was 33mph winds up there and I was white as a sheet by the time we made it to the top.

There is no way to walk back down so I had to ride the Sky Ride back down to the bottom and I was so terrified I almost threw up by the time we got down there! The view was spectacular but it was higher than I had bargained for! Not to mention that it just doesn’t feel safe with that little lap bar on you.

Overall – it was a great (although exhausting and terrifying) time at the Cheyenne Mountain Zoo! 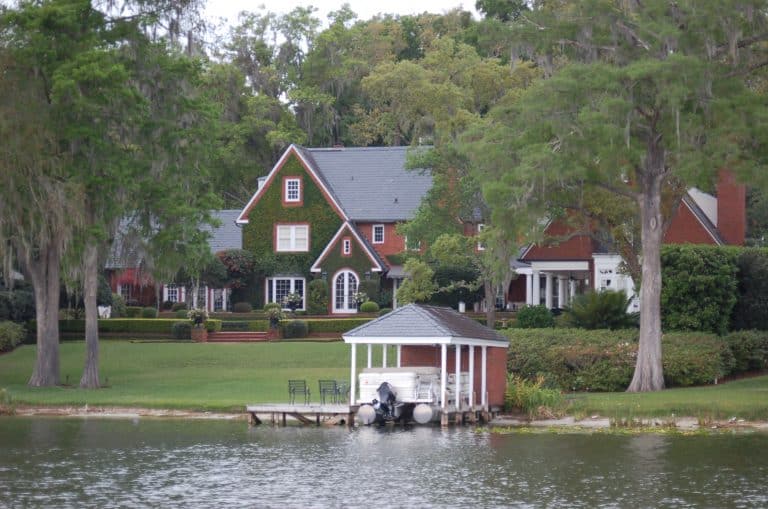