Ok, so I had to share this with someone since my kids certainly won’t appreciate it my husband, although he thinks it is cool, probably thinks I’m a little nuts too! You may remember in February that I met Greg Aronowitz at Toy Fair (see my post with photo here) who created & directed Labou – my boys reoccurring obsession!

Greg has done some amazing things in Hollywood which you can read about in my other post but his movie Labou is a kid-friendly movie about 3 kids searching for lost treasure. It’s one of those “clean movies you used to watch as a kid” that are becoming hard to find anymore! Anyways, my kids must have watched this at least 6 times in the past week. 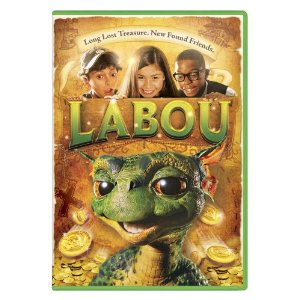 Every time they get “Labou-obsessed” it makes me wish we had a real Labou robot in our house – he’s SO cute and friendly! So I was checking out the Labou Stuff website to see if they had any stuffed Labou’s for Christmas and I spotted a SIGNED original movie script by Greg Aronowitz!! AND it was CHEAP! Check it out: 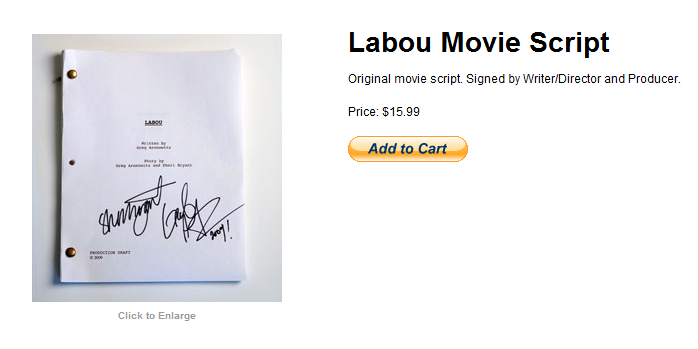 PLUS when I added it into my cart it was almost half that price! What a deal! I thought this would be SO cool when my kids are older to save our Labou DVD (when they’re done obsessing over it of course) along with Greg’s signed movie script as a special treasure to keep and pass on to their kids. It’s a little bit of stardom and fame. I love the passion and inspiration behind what Greg does.

He encourages kids to follow their dreams just like he did. It reminds me that my kids can be anything they want to be – whether it’s doodling on paper during class (sh! don’t tell his teacher!) or picking seed pods in the backyard – it could be shaping his future!

Now maybe I can talk Greg into that Labou robot to add to our collection……ok, at least a plush Labou…… 😉