My son who is in kindergarten has been coding with Dash & Dot (by Wonder Workshop) for the past month and just loves it! They sent us both robots to try out and use! My boys fight over who gets to use the robots. Although some of the more advanced lessons challenge him he loves how easy the app is to use! 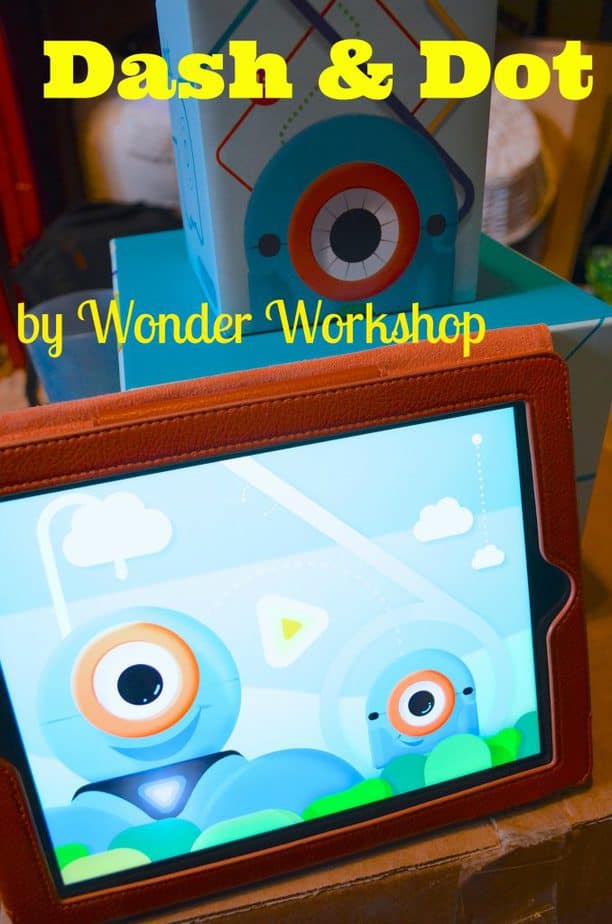 My children, as well as many children are intrigued by robots. And I haven’t met a child yet who turns down an electronic toy, tablet, or phone to play on. It’s just part of the future generations. So why not use it to their advantage? Give them something to LEARN while having fun! I am a HUGE proponent of educational fun & play for learning.

Did you know that in Estonia (a country in Europe) they actually incorporate coding as part of first grade education? And even a child as young as 5 years old can easily learn to begin coding on their own with the appropriate programming? YES 5 years old! (Although I truly believe my boys would have enjoyed Dash & Dot at an even younger age)

Dash & Dot are two individual robots that introduce children into the world of coding, sold separately or bundled together, which offer different features. (Accessories available too!) With these robots they work in conjunction with 4 different (free) apps (GO, PATH, BLOCKLY, and XYLO) that you can download available for specific devices. iPad seems to work best right now but Android devices are currently being worked on. 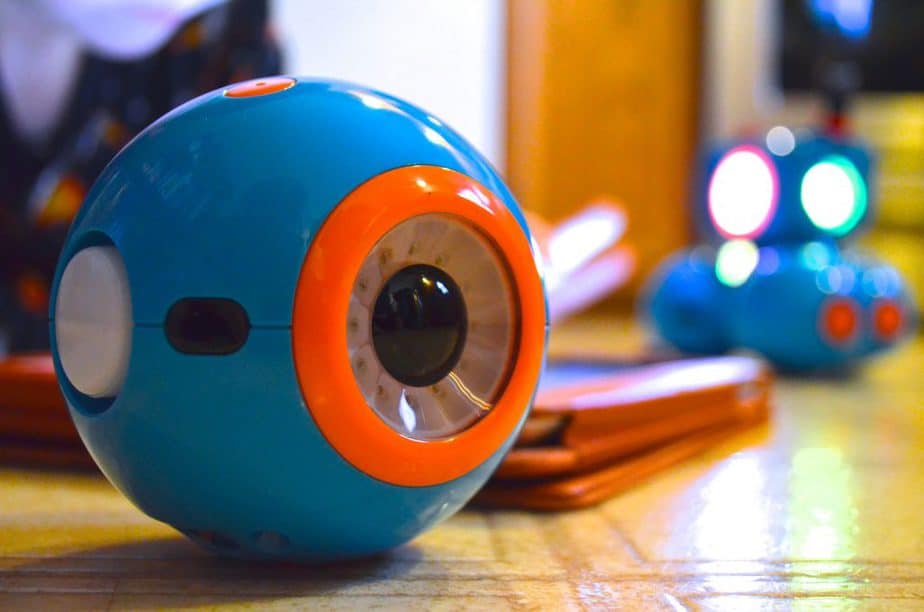 So let me walk  you through our experience this past month and introduce you to these robots a little. This is Dot, the lesser interactive robot of the two but still teaches important lessons and can be used in conjunction with Dash. Dot is not mobile like Dash (so she can’t roll around on the floor) but you can still code her to make various sounds and have different light patterns.

You can also use her to program Dash to do various chores. She has a programmable button on top of her, sensors, speaker and microphone, lights on her “eye” and “ears”, a gyroscope and accelerometer. All of these can be “played” with using the GO app and gives an immediate “cause and effect” sensation for kids as they can play with her lights and sounds.

It’s an extremely basic app that a child of any age can use in my opinion. My kids have all started with Dash and Dot when they were 5 years old. 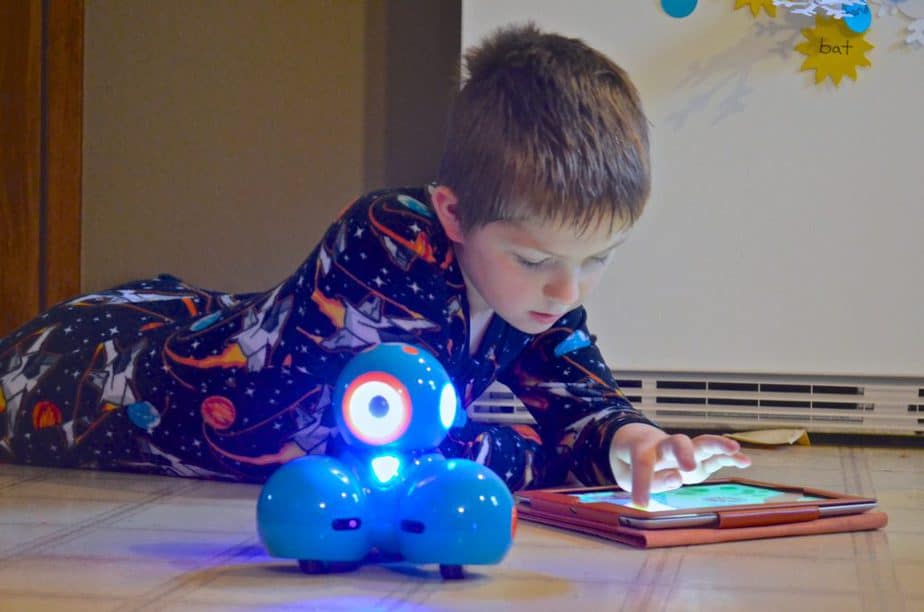 This is Dash and my 7 year old son playing coding games with her. If you can only afford one robot I highly recommend starting with Dash as she’s much more interactive and more customizable. You can also use the GO app (Google Play, iOS) to play with Dash’s lights and features. It helps you to learn how to control their basic functions.

The accessory connection points allow you to build LEGOs

onto her with building brick connectors, add a Tow Hook on to hang Dash (or Dot!) on a doorknob, backpack, etc. There are also a bulldozing bar, smartphone mount, bunny ears, and even a Xylophone! So really there are a lot of features with a lot of options. GO is a portal to online content and activities as well.

We started playing with Dash using the free PATH app (Amazon, Google Play, iOS) which is the app I recommend to start “coding” with your kids. It’s very self-explanatory and easy enough for the kids to do completely on their own. In fact after we downloaded the apps my kids didn’t even let me check the robots out – they just started playing immediately and left me to look at it later.

The PATH app is really the FUN zone and perfect for ages 5+. Both my boys LOVE the PATH app. It has 3 different “scenes” to play on and as the kids follow specific commands and create certain codes they can unlock new noises, features, etc. There is a farm scene, city scene, and race track.

On each level the kids have to trace their fingers on a specific path on the screen which will cause Dash to then move and follow that same exact path that the child has created. To move up in levels kids have to drag specific items on the path for Dash to do such as “moo” like a cow, “rev” a car engine, honk, etc.

If the child puts them in the correct sequence on the screen (which Dash then replicates) they can move on to the next level. 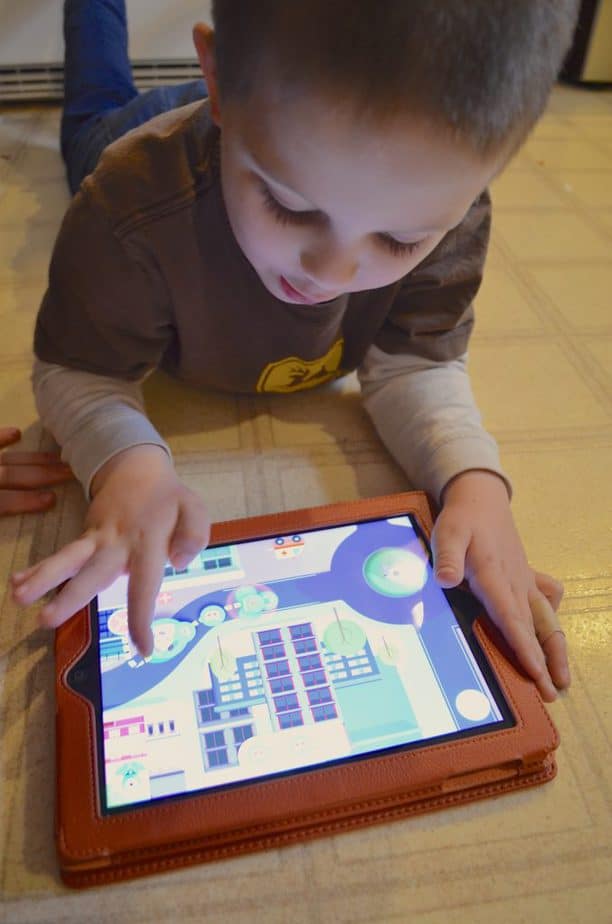 Here you can see my 5 year old playing on the PATH app and dragging his finger across a specified path. They love the reward of unlocking new features and sounds and watching Dash do exactly what they kids have “programmed” her to do. 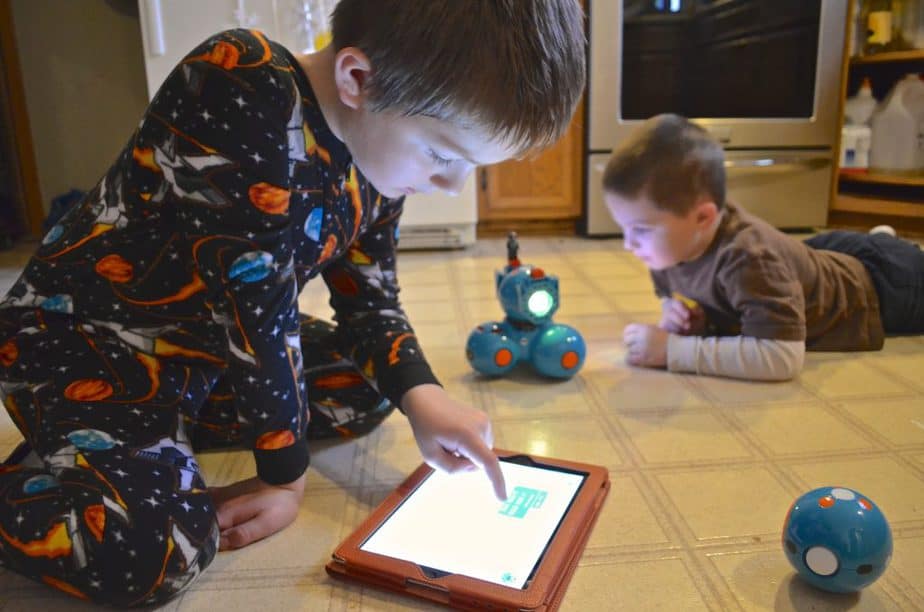 The next app we use it BLOCKLY which is geared for children ages 7+. If you know anything about coding this is actually the first touchscreen Blockly app available on the market. Various coding commands are listed in individual “blocks” which the kids can drag and attach to each other to cause Dash to do various commands.

Again this is a great immediate “cause and effect” sensation for kids and is incredibly simple to play around with. Above you can see my 7 year old using BLOCKLY to drive Dash right up to his brother. You can see Dot sitting in front of him.

You can code Dash so that she won’t do anything until you wave Dot in front of her, or even make her wait until you clap or speak to her!

You can see even how simply Blockly is laid out for kids to use here. It’s all very simply laid out – just drag & drop! I’ve already seen others create some awesome codes with this by making Dash driving around obstacle courses, push toys around the house, etc.

Blockly, however, can be VERY challenging trying to get the correct sequence of events coded to make Dash do specific functions or follow a specific path. It’s fantastic for interactive problem solving! 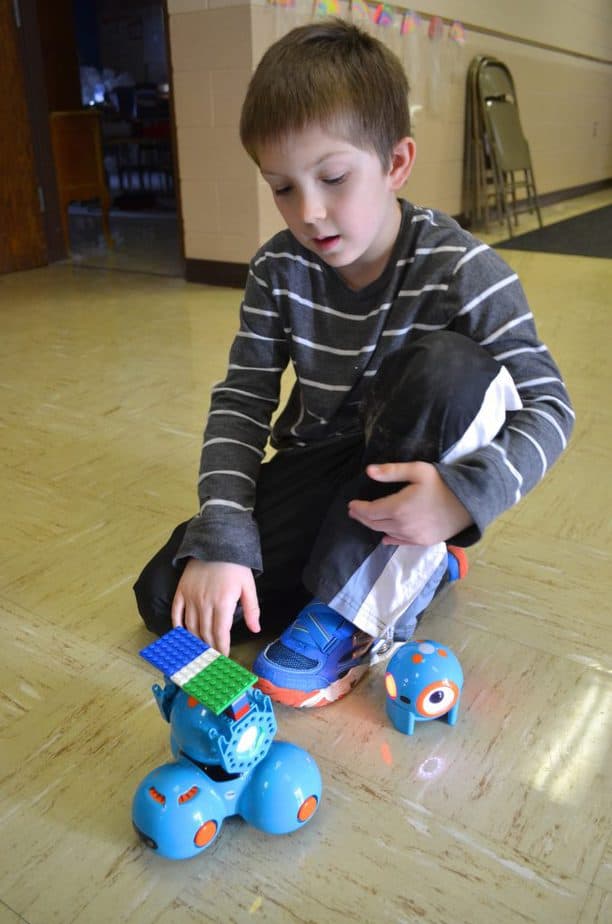 One thing I really love about Dash & Dot besides that it’s just flat out fun and educational is that I am encouraging my kids in guided play. This has been shown to boost young children’s academic development in reading and math.

My kids much prefer to learn on their own by doing something than by me simply telling them about it. Although they can use these robots however they like they are also guided by direct instruction for various codes and can really work at problem solving.

If Dash runs out of her obstacle course my son has to figure out how to code her so that she stays within her boundaries. I’ve seen some kids build LEGO attachments onto the front to hold markers and color, push other LEGOs around, etc.

There really is no limit to what a child can do with Dash & Dot other than their own ability or imagination. 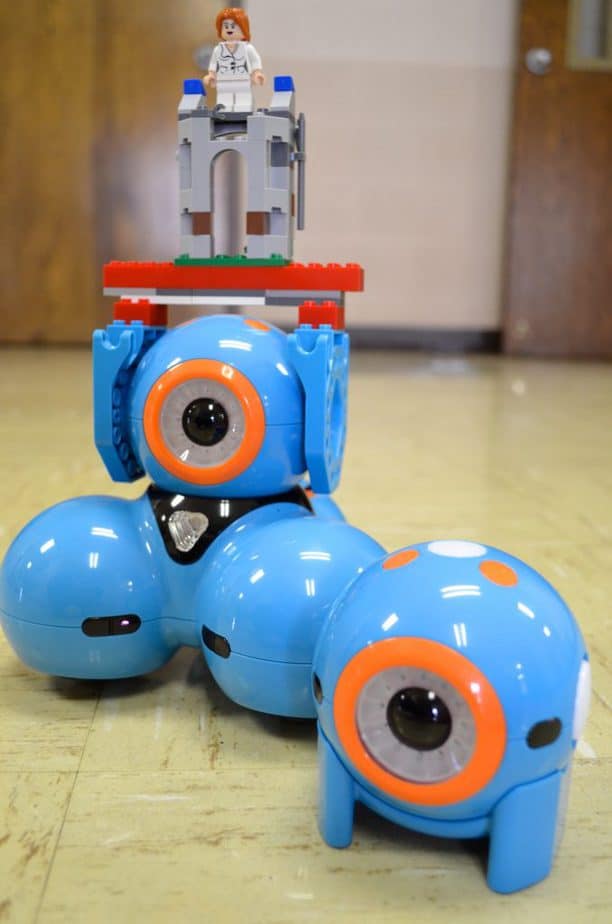 (Just a side note that the connectable “ears” to attach building bricks can be rotated in various directions so that you can build LEGOs in the front, back, or on top of the robots.)

There is also one other app called XYLO that I haven’t had the opportunity to use because you need the Xylophone accessory to go with it which we don’t have. But as you can imagine with the name “xylo” kids can use this app to create and compose musical numbers for Dash that she will actually play on a xylophone – whether it’s your child’s created music or pre-designed tunes.

There ARE plans in the works to come up with some cool lesson ideas for classrooms! The goal is to publish a set of core lessons that can be used to teach certain concepts in computer science classes. Definitely check out this post by Digital Scoop to see how they used Dash in a creative way in their classroom!

Overall this product is really high quality and a fantastic way to introduce and encourage coding with children from about ages 5-10. Dash & Dot have SO much potential and are a TON of fun for both kids and adults to “play” with and learn from.

Here are a few short clips of my kids interacting with Dash & Dot:

The first farm dance my kids created #makewonder ….. we’re having a blast exploring!

You can purchase the Dash & Dot Wonder Pack on Amazon here 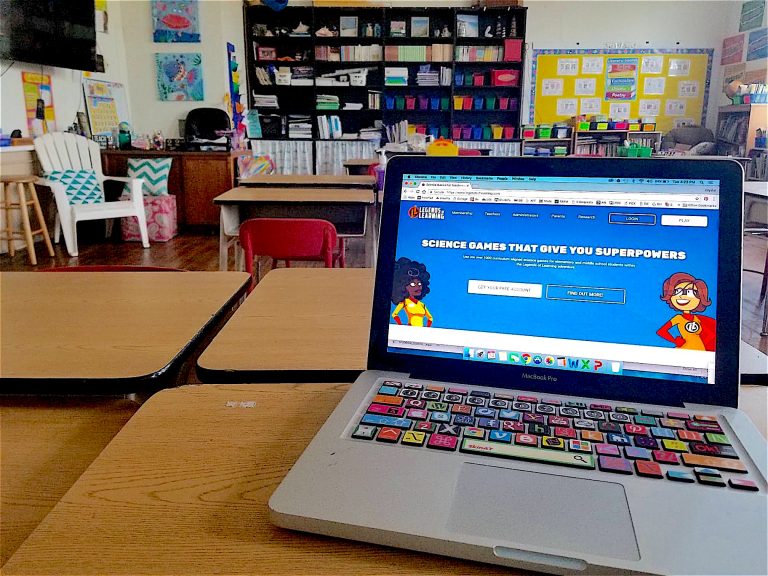